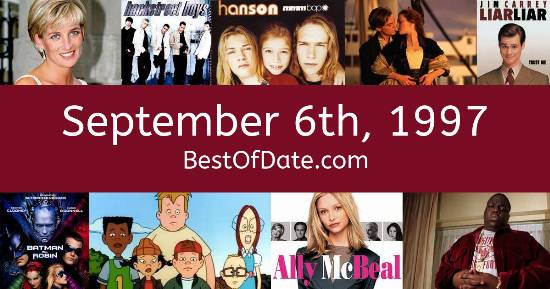 Songs that were on top of the music singles charts in the USA and the United Kingdom on September 6th, 1997.

The movie "Fire Down Below" was at the top of the box office on September 6th, 1997.

The date is September 6th, 1997 and it's a Saturday. Anyone born today will have the star sign Virgo. Currently, people are enjoying their weekend.

Schools have started back and autumn has arrived, so temperatures have started to cool and trees are beginning to shed their leaves. In America, the song Mo Money Mo Problems by Notorious B.I.G. is on top of the singles charts. Over in the UK, Men In Black by Will Smith is the number one hit song.

Bill Clinton is currently the President of the United States and the movie Fire Down Below is at the top of the Box Office. In the United Kingdom, Tony Blair is the current Prime Minister. A new form of communication called "text messaging" is continuing to grow in popularity. However, it can only be done if both the sender and the receiver are on the same cell network.

It's 1997, so radio stations are being dominated by the likes of Toni Braxton, the Spice Girls, Puff Daddy, No Doubt, Hanson and Elton John. The United Kingdom is in mourning following the recent death of Princess Diana in a car crash in Paris. If you were to travel back to this day, notable figures such as John Denver, Chris Farley, Sonny Bono and Rob Pilatus would all be still alive.

On TV, people are watching popular shows such as "Home Improvement", "Frasier", "ER" and "Friends". Meanwhile, gamers are playing titles such as "Super Mario 64", "Diablo", "Castlevania: Symphony of the Night" and "Theme Hospital". Children and teenagers are currently watching television shows such as "In the House", "Moesha", "Pokemon" and "USA High".

If you're a kid or a teenager, then you're probably playing with toys such as Sylvanian Families, Jenga, Polly Pocket and Littlest Pet Shop.

If you are looking for some childhood nostalgia, then check out September 6th, 2003 instead.

Love Island contestant.
Born on September 6th, 1999
She was born exactly 2 years after this date.

Bill Clinton was the President of the United States on September 6th, 1997.

Tony Blair was the Prime Minister of the United Kingdom on September 6th, 1997.

Enter your date of birth below to find out how old you were on September 6th, 1997.

Here are some fun statistics about September 6th, 1997.

Have something to say about September 6th, 1997?