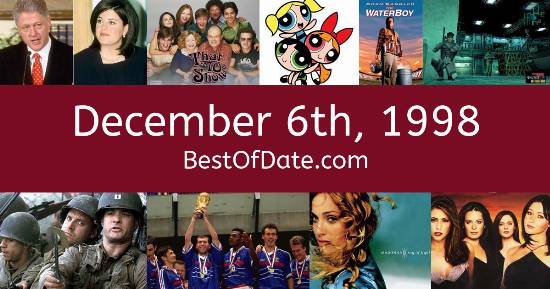 Songs that were on top of the music singles charts in the USA and the United Kingdom on December 6th, 1998.

The date is December 6th, 1998 and it's a Sunday. Anyone born today will have the star sign Sagittarius. Currently, people are enjoying their weekend.

The Christmas season of 1998 has just started. In America, the song I'm Your Angel by R. Kelly & Celine Dion is on top of the singles charts. Over in the UK, Believe by Cher is the number one hit song.

Bill Clinton is currently the President of the United States and the movie A Bug's Life is at the top of the Box Office. In the United Kingdom, Tony Blair is the current Prime Minister. Meanwhile, in technology news, CDs have become the dominant format for music. People are buying CD players and the portable CD players such as the "Discman". As a result, the older cassette tape format is continuing to decline in sales.

US President Bill Clinton is being impeached for lying under oath and obstruction of justice. The Furby craze has started, with over 1.8 million units being sold throughout the Christmas season. On TV, people are watching popular shows such as "The Nanny", "Recess", "CatDog" and "The Powerpuff Girls".

Meanwhile, gamers are playing titles such as "Age of Empires", "Resident Evil 2", "Tom Clancy's Rainbow Six" and "The Legend of Zelda: Ocarina of Time". Kids and teenagers are watching TV shows such as "Home Improvement", "Arthur", "The Angry Beavers" and "Bob the Builder". If you're a kid or a teenager, then you're probably playing with toys such as Jenga, Polly Pocket, the PlayStation (PS1) and Groovy Girls.

If you are looking for some childhood nostalgia, then check out December 6th, 2004 instead.

Bill Clinton was the President of the United States on December 6th, 1998.

Tony Blair was the Prime Minister of the United Kingdom on December 6th, 1998.

Enter your date of birth below to find out how old you were on December 6th, 1998.

Here are some fun statistics about December 6th, 1998.

Have something to say about December 6th, 1998?