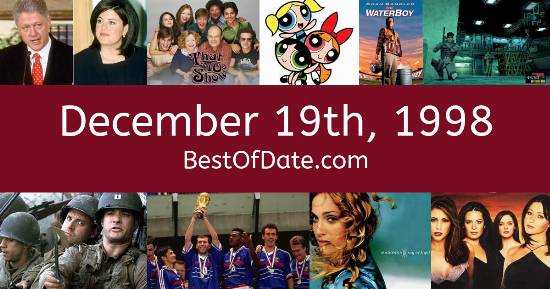 Songs that were on top of the music singles charts in the USA and the United Kingdom on December 19th, 1998.

The date is December 19th, 1998 and it's a Saturday. Anyone born today will have the star sign Sagittarius. Currently, people are enjoying their weekend.

The Christmas season of 1998 is in full swing. The decorations are up and festive songs are playing on the radio. In America, the song I'm Your Angel by R. Kelly & Celine Dion is on top of the singles charts. Over in the UK, To You I Belong by B*Witched is the number one hit song.

Bill Clinton is currently the President of the United States and the movie You've Got Mail is at the top of the Box Office. In the United Kingdom, Tony Blair is the current Prime Minister. Meanwhile, in technology news, CDs have become the dominant format for music. People are buying CD players and the portable CD players such as the "Discman". As a result, the older cassette tape format is continuing to decline in sales.

US President Bill Clinton is being impeached for lying under oath and obstruction of justice. The Furby craze has started, with over 1.8 million units being sold throughout the Christmas season. On TV, people are watching popular shows such as "Home Improvement", "Melrose Place", "Buffy the Vampire Slayer" and "Two Guys, a Girl and a Pizza Place".

Meanwhile, gamers are playing titles such as "Resident Evil 2", "Tenchu: Stealth Assassins", "Metal Gear Solid" and "Pokémon Red and Blue". Kids and teenagers are watching TV shows such as "Blue's Clues", "Sabrina the Teenage Witch", "Daria" and "Bear in the Big Blue House". Popular toys at the moment include the likes of Sylvanian Families, Jenga, the PlayStation (PS1) and the Nintendo 64.

Bill Clinton was the President of the United States on December 19th, 1998.

Tony Blair was the Prime Minister of the United Kingdom on December 19th, 1998.

Enter your date of birth below to find out how old you were on December 19th, 1998.

Here are some fun statistics about December 19th, 1998.