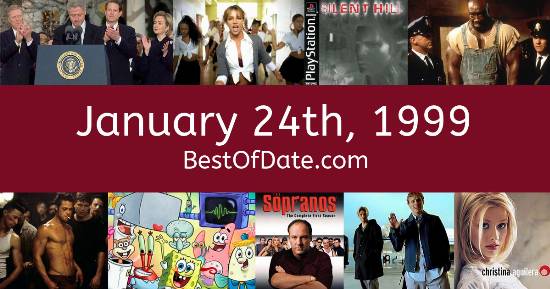 On January 24th, 1999, the following songs were at the top of the music charts in the USA and the UK.

The top "Box Office" movie on this date was the film "Varsity Blues".

The date is January 24th, 1999, and it's a Sunday. Anyone born today will have the star sign Aquarius. Currently, people are enjoying their weekend.

In America, the song Have You Ever by Brandy is on top of the singles charts. Over in the UK, Praise You by Fatboy Slim is the number one hit song. Bill Clinton is currently the President of the United States, and the movie Varsity Blues is at the top of the Box Office.

In the United Kingdom, Tony Blair is the current Prime Minister. Meanwhile, CDs have become the dominant format for music. People are buying CD players and portable CD players such as the "Discman". As a result, the older cassette tape format is continuing to decline in sales. In fashion, bright and metallic colors are all the rage. A contrast with the darker "grunge" colors that were popular at the beginning of the 1990s. Women are wearing maxi skirts, bell bottoms, knee boots, crop tops, tube tops, slip dresses, maxi coats and platform shoes. Meanwhile, a lot of men have ditched their grunge and skater clothes in favor of sporting a more "dressy casual" look. Shorter hair on men is also becoming more popular.

US President Bill Clinton is being impeached for lying under oath and obstruction of justice. A relatively new form of communication called "text messaging" is continuing to explode in popularity. Although the technology has been around since the mid-1990s, it was only recently that cell providers started to allow users to send SMS messages to people on different networks. It's 1999, so radio stations are being dominated by the likes of Cher, TLC, Monica, Whitney Houston, Britney Spears, Jennifer Lopez, Santana and Ricky Martin.

If you were to travel back to this day, notable figures such as Big L, Stanley Kubrick, Joe DiMaggio and Jill Dando would all be still alive. On TV, people are watching popular shows such as "The X-Files", "ER", "Buffy the Vampire Slayer" and "Becker". Meanwhile, gamers are playing titles such as "Resident Evil 2", "World Cup 98", "Pokémon Red and Blue" and "Oddworld: Abe's Exoddus".

Kids and teenagers are watching TV shows such as "Art Attack", "The Nanny", "City Guys" and "Ed, Edd n Eddy". If you're a kid or a teenager, then you're probably playing with toys such as Screwball Scramble, Yo-yo, Littlest Pet Shop and Spice Girls dolls.

These are trending news stories and fads that were prevalent at this time. These are topics that would have been in the media on January 24th, 1999.

Check out our personality summary for people who were born on January 24th, 1999.

Television shows that people were watching in January, 1999.

Popular video games that people were playing in January of 1999.

If you are looking for some childhood nostalgia, then you should check out January 24th, 2005, instead.

Bill Clinton was the President of the United States on January 24th, 1999.

Enter your date of birth below to find out how old you were on January 24th, 1999.
This information is not transmitted to our server.

Here are some fun statistics about January 24th, 1999.