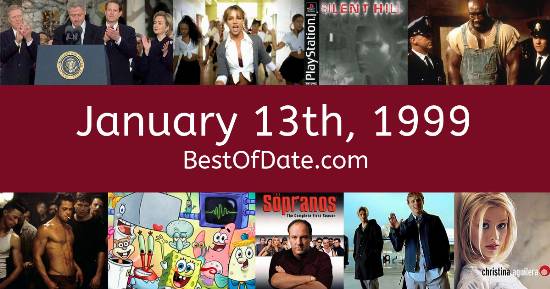 Songs that were on top of the music singles charts in the USA and the United Kingdom on January 13th, 1999.

The date is January 13th, 1999 and it's a Wednesday. Anyone born today will have the star sign Capricorn. The Christmas holiday season is long over, the decorations have been taken down and a sense of normality has returned.

In America, the song I'm Your Angel by R. Kelly & Celine Dion is on top of the singles charts. Over in the UK, Heartbeat / Tragedy by Steps is the number one hit song. Bill Clinton is currently the President of the United States and the movie A Civil Action is at the top of the Box Office.

US President Bill Clinton is being impeached for lying under oath and obstruction of justice. It's 1999, so radio stations are being dominated by the likes of Cher, TLC, Monica, Whitney Houston, Britney Spears, Jennifer Lopez, Santana and Ricky Martin. On TV, people are watching popular shows such as "Touched by an Angel", "Buffy the Vampire Slayer", "Sex and the City" and "The Wild Thornberrys".

If you are looking for some childhood nostalgia, then check out January 13th, 2005 instead.

Bill Clinton was the President of the United States on January 13th, 1999.

Tony Blair was the Prime Minister of the United Kingdom on January 13th, 1999.

Enter your date of birth below to find out how old you were on January 13th, 1999.

Here are some fun statistics about January 13th, 1999.