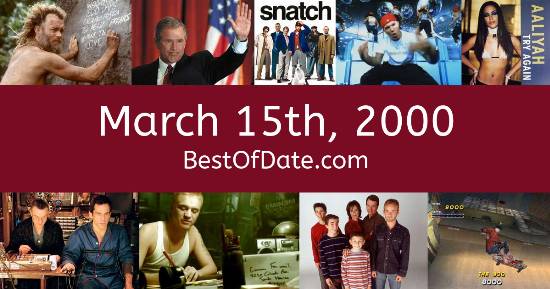 Songs that were on top of the music singles charts in the USA and the United Kingdom on March 15th, 2000.

The date is March 15th, 2000 and it's a Wednesday. Anyone born today will have the star sign Pisces. Spring has started to creep in and the days are beginning to get longer.

St. Patrick's Day is just around the corner. In America, the song Amazed by Lonestar is on top of the singles charts. Over in the UK, American Pie by Madonna is the number one hit song.

Bill Clinton is currently the President of the United States and the movie Mission to Mars is at the top of the Box Office. In the United Kingdom, Tony Blair is the current Prime Minister. The Nokia 3210 is currently one of the most popular cell phones on the market.

In technology news, more and more music companies are beginning to release MP3 players. The new MP3 format means that music listeners are able to listen to multiple albums on the go. It's the year 2000, so the music charts are being dominated by the likes of Christina Aguilera, Faith Hill, Savage Garden, Destiny's Child, Santana, Sisqó, Creed, Aaliyah and Enrique Iglesias. On TV, people are watching popular shows such as "Buffy the Vampire Slayer", "Beyond Belief: Fact or Fiction", "Dawson's Creek" and "The Amanda Show".

Meanwhile, gamers are playing titles such as "Resident Evil 3: Nemesis", "Unreal Tournament", "The Sims" and "Dead or Alive 2". Children and teenagers are currently watching television shows such as "The Simpsons", "Friends", "Rocket Power" and "Malcolm in the Middle". If you're a kid or a teenager, then you're probably playing with toys such as the PlayStation (PS1), Groovy Girls, the Game Boy Color and the Dreamcast.

If you are looking for some childhood nostalgia, then check out March 15th, 2006 instead.

Celebrities, historical figures and notable people who were born on the 15th of March.

Bill Clinton was the President of the United States on March 15th, 2000.

Tony Blair was the Prime Minister of the United Kingdom on March 15th, 2000.

Enter your date of birth below to find out how old you were on March 15th, 2000.