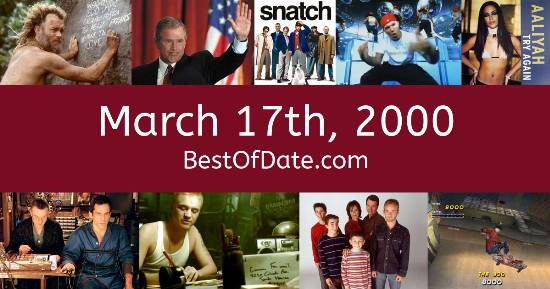 These songs were on top of the music charts in the United States and the United Kingdom on March 17th, 2000.

The movie "Mission to Mars" was at the top of the Box Office on this day.

The date is March 17th, 2000, and it's a Friday. Anyone born today will have the star sign Pisces. Currently, people have "that Friday feeling" and are looking forward to the weekend.

Spring has arrived and the days have become longer. It's St. Patrick's Day, which means that a sizeable amount of people are spending their day in bars. Parades are being held in major cities throughout the world. In America, the song Amazed by Lonestar is on top of the singles charts.

Over in the UK, American Pie by Madonna is the number one hit song. Bill Clinton is currently the President of the United States, and the movie Mission to Mars is at the top of the Box Office. In the United Kingdom, Tony Blair is the current Prime Minister.

It's the year 2000, so the music charts are being dominated by the likes of Christina Aguilera, Faith Hill, Savage Garden, Destiny's Child, Santana, Sisqó, Creed, Aaliyah and Enrique Iglesias. If you were to travel back to this day, notable figures such as David Tomlinson, Walter Matthau, Yokozuna and Dale Earnhardt would all be still alive. On TV, people are watching popular shows such as "Last of the Summer Wine", "Xena: Warrior Princess", "3rd Rock from the Sun" and "Ally McBeal".

Meanwhile, gamers are playing titles such as "Driver", "Resident Evil 3: Nemesis", "Donkey Kong 64" and "Gran Turismo 2". Children and teenagers are currently watching television shows such as "Rugrats", "Hang Time", "Arthur" and "Malcolm in the Middle". Popular toys at the moment include the likes of Gogo's Crazy Bones, Betty Spaghetty (doll), the Dreamcast and Finger skateboards.

These are trending news stories and fads that were prevalent at this time. These are topics that would have been in the media on March 17th, 2000.

News stories and other events that happened around March 17th, 2000.

Check out our personality summary for people who were born on March 17th, 2000.

Television shows that people were watching in March, 2000.

Popular video games that people were playing in March of 2000.

If you are looking for some childhood nostalgia, then you should check out March 17th, 2006 instead.

Bill Clinton was the President of the United States on March 17th, 2000.

Tony Blair was the Prime Minister of the United Kingdom on March 17th, 2000.

Find out what your age was on March 17th, 2000, by entering your DOB below.
This information is not saved on our server.