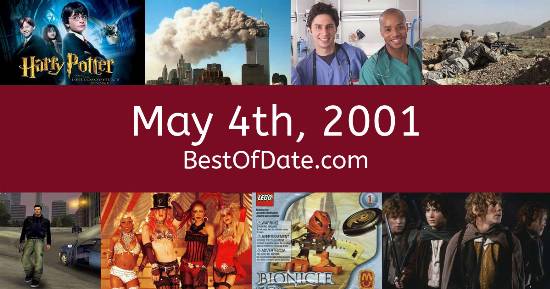 Songs that were on top of the music singles charts in the USA and the United Kingdom on May 4th, 2001.

The date is May 4th, 2001 and it's a Friday. Anyone born today will have the star sign Taurus. Currently, people have "that Friday feeling" and are looking forward to the weekend.

The summer of 2001 has finally arrived. The weather has warmed up and the evenings are brighter than usual. In America, the song All For You by Janet Jackson is on top of the singles charts. Over in the UK, Don't Stop Movin' by S Club 7 is the number one hit song.

George W. Bush Jnr. is currently the President of the United States and the movie Driven is at the top of the Box Office. In the United Kingdom, Tony Blair is the current Prime Minister. The Nokia 3310 is one of the most popular cell phones on the market at the moment. Stores across the world are currently selling a wide range of custom covers for the phone.

It's 2001, so the music charts are being dominated by the likes of Christina Aguilera, Janet Jackson, OutKast, Crazy Town, Destiny's Child, Usher, Alicia Keys, Blu Cantrell and Jennifer Lopez. An outbreak of foot-and-mouth disease in the United Kingdom is currently causing a crisis in the British agriculture and tourism sectors. Cows and sheep are currently being killed in an effort to halt the disease. On TV, people are watching popular shows such as "Rugrats", "Sabrina, the Teenage Witch", "Sex and the City" and "The Powerpuff Girls".

Meanwhile, gamers are playing titles such as "Final Fantasy IX", "Spider-Man", "Tony Hawk's Pro Skater 2" and "The Legend of Zelda: Majora's Mask". Kids and teenagers are watching TV shows such as "Rugrats", "That '70s Show", "Lizzie McGuire" and "The Fairly OddParents". If you're a kid or a teenager, then you're probably playing with toys such as the Dreamcast, Poo-Chi (robot dog), Razor (scooter) and the PlayStation 2.

Notable events that occurred around May 4th, 2001.

Historical weather information for May 4th, 2001.

Tony Blair was the Prime Minister of the United Kingdom on May 4th, 2001.

Enter your date of birth below to find out how old you were on May 4th, 2001.

Leave a comment and tell everyone why May 4th, 2001 is important to you.