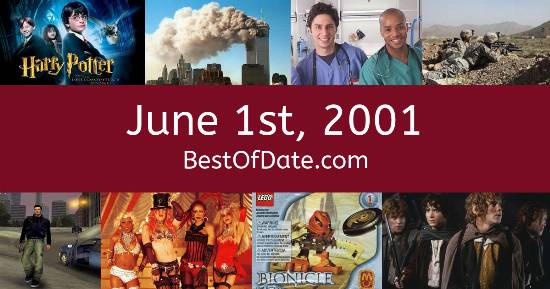 Songs that were on top of the music singles charts in the USA and the United Kingdom on June 1st, 2001:

The date is June 1st, 2001 and it's a Friday. Anyone born today will have the star sign Gemini. Currently, people have "that Friday feeling" and are looking forward to the weekend.

It's summer, so the temperatures are warmer and the evenings are longer than usual. In America, the song Lady Marmalade by Christina Aguilera, Lil Kim, Mya & Pink is on top of the singles charts. Over in the UK, Do You Really Like It by DJ Pied Piper is the number one hit song.

George W. Bush Jnr. is currently the President of the United States and the movie Pearl Harbor is at the top of the Box Office. In the United Kingdom, Tony Blair is the current Prime Minister. The Nokia 3310 is one of the most popular cell phones on the market at the moment. Stores across the world are currently selling a wide range of custom covers for the phone.

It's 2001, so the music charts are being dominated by the likes of Christina Aguilera, Janet Jackson, OutKast, Crazy Town, Destiny's Child, Usher, Alicia Keys, Blu Cantrell and Jennifer Lopez. An outbreak of foot-and-mouth disease in the United Kingdom is currently causing a crisis in the British agriculture and tourism sectors. Cows and sheep are currently being killed in an effort to halt the disease. On TV, people are watching popular shows such as "Buffy the Vampire Slayer", "Ally McBeal", "Dora the Explorer" and "Jackass".

Meanwhile, gamers are playing titles such as "Colin McRae Rally 2.0", "Final Fantasy IX", "Tony Hawk's Pro Skater 2" and "The Legend of Zelda: Majora's Mask". Children and teenagers are currently watching television shows such as "7th Heaven", "City Guys", "SpongeBob SquarePants" and "The Fairly OddParents". If you're a kid or a teenager, then you're probably playing with toys such as "The Dreamcast", "Razor (scooter)", "PlayStation 2" and "Bratz (dolls)".

Celebrities, historical figures and noteable people who were born on the 1st of June:

Who was the Prime Minister of the United Kingdom on June 1st, 2001?

Enter your date of birth below to find out how old you were on June 1st, 2001.

Looking for some nostalgia? Here are some Youtube videos relating to June 1st, 2001. Please note that videos are automatically selected by Youtube and that results may vary! Click on the "Load Next Video" button to view the next video in the search playlist. In many cases, you'll find episodes of old TV shows, documentaries, music videos and soap dramas.

Here are some fun statistics about June 1st, 2001.