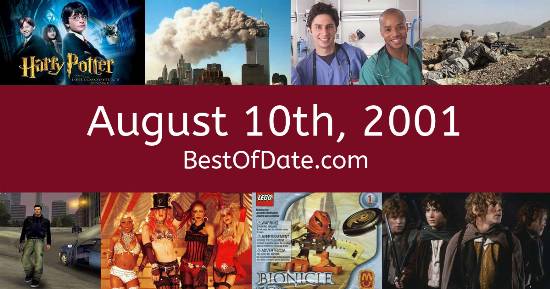 Songs that were on top of the music singles charts in the USA and the United Kingdom on August 10th, 2001.

The date is August 10th, 2001 and it's a Friday. Anyone born today will have the star sign Leo. Currently, people have "that Friday feeling" and are looking forward to the weekend.

It's summer, so the temperatures are warmer and the evenings are longer than usual. In America, the song Bootylicious by Destiny's Child is on top of the singles charts. Over in the UK, Eternal Flame by Atomic Kitten is the number one hit song.

George W. Bush Jnr. is currently the President of the United States and the movie Rush Hour 2 is at the top of the Box Office. In the United Kingdom, Tony Blair is the current Prime Minister. In technology news, more and more music companies are beginning to release MP3 players. The new MP3 format means that music listeners are able to listen to multiple albums on the go.

On TV, people are watching popular shows such as "JAG", "Angel", "Andromeda" and "Dark Angel". Meanwhile, gamers are playing titles such as "Spider-Man", "Tony Hawk's Pro Skater 2", "Final Fantasy X" and "Max Payne". Children and teenagers are currently watching television shows such as "The Simpsons", "Rugrats", "Recess" and "The Fairly OddParents".

If you're a kid or a teenager, then you're probably playing with toys such as Groovy Girls, Razor (scooter), the PlayStation 2 and Bratz (dolls).

Celebrities, historical figures and notable people who were born on the 10th of August.

George W. Bush Jnr. was the President of the United States on August 10th, 2001.

Tony Blair was the Prime Minister of the United Kingdom on August 10th, 2001.

Enter your date of birth below to find out how old you were on August 10th, 2001.