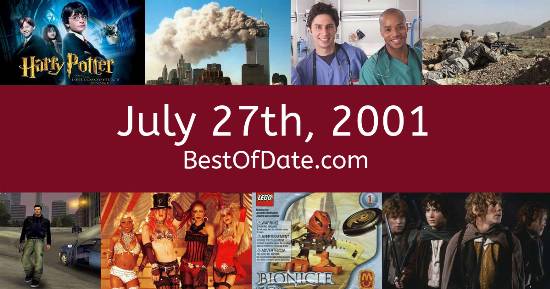 On July 27th, 2001, the following songs were at the top of the music charts in the USA and the UK.

The following comments about July 27th, 2001 were written by our visitors.

I had completely forgotten about Brian Dowling. The first season of Big Brother was very popular, as the concept was fresh at the time. I was just a child back then, but I still remember how excited my babysitter was to watch it. There was also a "live" channel that streamed the house 24/7. However, the sound would be muted whenever they started talking about anything that might offend people.
Posted on June 1st, 2022 14:36

I went to see the Planet of the Apes with my friend. I still remember how it was a sunny day and I was wearing a Wu-Tang hoodie!
Posted on July 27th, 2022 00:40

The date is July 27th, 2001, and it's a Friday. Anyone born today will have the star sign Leo. Currently, people have "that Friday feeling" and are looking forward to the weekend.

It's summer, so the temperatures are warmer and the evenings are longer than usual. In America, the song U Remind Me by Usher is on top of the singles charts. Over in the UK, Eternity / The Road To Mandalay by Robbie Williams is the number one hit song.

George W. Bush Jnr. is currently the President of the United States, and the movie Planet of the Apes (2001) is at the top of the Box Office. In the United Kingdom, Tony Blair is the current Prime Minister. A relatively new form of communication called "text messaging" is continuing to explode in popularity. Although the technology has been around since the mid-1990s, it was only recently that cell providers started to allow users to send SMS messages to people on different networks.

An outbreak of foot-and-mouth disease in the United Kingdom is currently causing a crisis in the British agriculture and tourism sectors. Cows and sheep are currently being killed in an effort to halt the disease. If you were to travel back to this day, notable figures such as Aaliyah, Thuy Trang, George Harrison and Left Eye would all be still alive. On TV, people are watching popular shows such as "Touched by an Angel", "Friends", "Sex and the City" and "Becker".

Meanwhile, gamers are playing titles such as "Diablo II", "Mario Tennis", "The Legend of Zelda: Majora's Mask" and "Max Payne". Children and teenagers are currently watching television shows such as "Friends", "Bob the Builder", "The Amanda Show" and "Grounded for Life". Popular toys at the moment include the likes of Razor (scooter), Tekno the Robotic Puppy, Bratz dolls and the Game Boy Advance.

These are trending news stories and fads that were prevalent at this time. These are topics that would have been in the media on July 27th, 2001.

News stories and other events that happened around July 27th, 2001.

Check out our personality summary for people who were born on July 27th, 2001.

Television shows that people were watching in July, 2001.

Popular video games that people were playing in July of 2001.

If you are looking for some childhood nostalgia, then you should check out July 27th, 2007 instead.

Tony Blair was the Prime Minister of the United Kingdom on July 27th, 2001.

Find out what your age was on July 27th, 2001, by entering your DOB below.
This information is not saved on our server.