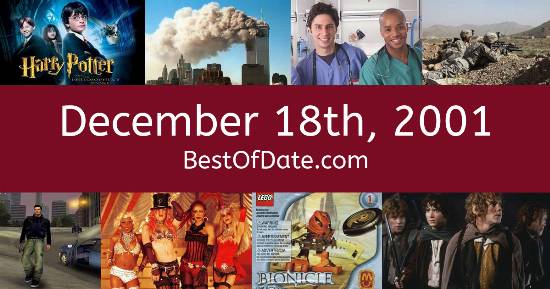 These songs were on top of the music charts in the United States and the United Kingdom on December 18th, 2001.

The movie "Vanilla Sky" was at the top of the Box Office on this day.

The date is December 18th, 2001, and it's a Tuesday. Anyone born today will have the star sign Sagittarius. The Christmas season of 2001 is in full swing. People are putting up their decorations and festive songs are playing on the radio.

In America, the song How You Remind Me by Nickelback is on top of the singles charts. Over in the UK, Something Stupid by Robbie Williams & Nicole Kidman is the number one hit song. George W. Bush Jnr. is currently the President of the United States, and the movie Vanilla Sky is at the top of the Box Office.

Meanwhile, the Nokia 3310 is one of the most popular cell phones on the market at the moment. Stores across the world are currently selling a wide range of custom covers for the phone. It's 2001, so the music charts are being dominated by the likes of Christina Aguilera, Janet Jackson, OutKast, Crazy Town, Destiny's Child, Usher, Alicia Keys, Blu Cantrell and Jennifer Lopez. If you were to travel back to this day, notable figures such as Left Eye, The British Bulldog, John Gotti and Jam Master Jay would all be still alive.

On TV, people are watching popular shows such as "Dawson's Creek", "The King of Queens", "Andromeda" and "The Office (UK version).". Meanwhile, gamers are playing titles such as "WWF SmackDown! 2: Know Your Role", "Red Faction", "Tony Hawk's Pro Skater 3" and "SSX Tricky". Children and teenagers are currently watching television shows such as "7th Heaven", "That '70s Show", "Grizzly Tales for Gruesome Kids" and "My Wife and Kids".

Popular toys at the moment include the likes of Gogo's Crazy Bones, Tekno the Robotic Puppy, the PlayStation 2 and the Xbox.

These are trending news stories and fads that were prevalent at this time. These are topics that would have been in the media on December 18th, 2001.

Check out our personality summary for people who were born on December 18th, 2001.

Television shows that people were watching in December, 2001.

Popular video games that people were playing in December of 2001.

If you are looking for some childhood nostalgia, then you should check out December 18th, 2007 instead.

George W. Bush Jnr. was the President of the United States on December 18th, 2001.

Tony Blair was the Prime Minister of the United Kingdom on December 18th, 2001.

Enter your date of birth below to find out how old you were on December 18th, 2001.
This information is not transmitted to our server.

Here are some fun statistics about December 18th, 2001.