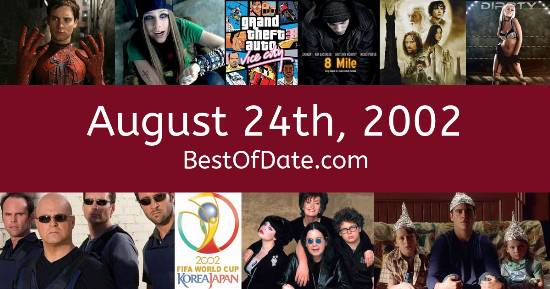 Songs that were on top of the music singles charts in the USA and the United Kingdom on August 24th, 2002.

The date is August 24th, 2002 and it's a Saturday. Anyone born today will have the star sign Virgo. Currently, people are enjoying their weekend.

The summer of 2002 is coming to an end and fall is just around the corner. In America, the song Dilemma by Nelly & Kelly Rowland is on top of the singles charts. Over in the UK, Round Round by Sugababes is the number one hit song.

If you're a kid or a teenager, then you're probably playing with toys such as Poo-Chi (robot dog), Razor (scooter), Yu-Gi-Oh! Trading Card Game and Beyblades (spinning top toys).

Celebrities, historical figures and notable people who were born on the 24th of August.

George W. Bush Jnr. was the President of the United States on August 24th, 2002.

Tony Blair was the Prime Minister of the United Kingdom on August 24th, 2002.

Enter your date of birth below to find out how old you were on August 24th, 2002.

Leave a comment and tell everyone why August 24th, 2002 is important to you.