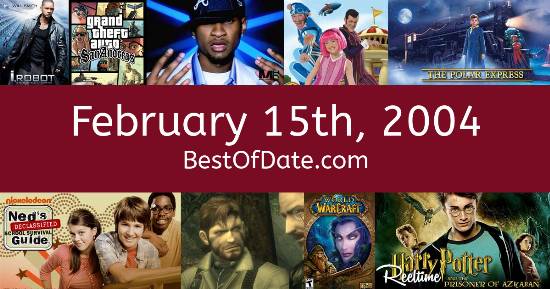 Songs that were on top of the music singles charts in the USA and the United Kingdom on February 15th, 2004.

The date is February 15th, 2004 and it's a Sunday. Anyone born today will have the star sign Aquarius. Currently, people are enjoying their weekend.

Valentine's Day of 2004 has just passed. In America, the song The Way You Move by Outkast is on top of the singles charts. Over in the UK, Take Me To The Clouds Above by LMC & U2 is the number one hit song.

George W. Bush Jnr. is currently the President of the United States and the movie Barbershop 2 is at the top of the Box Office. In the United Kingdom, Tony Blair is the current Prime Minister. In technology news, more and more people are beginning to gain access to the Internet. Internet speeds are increasing and MP3 sharing is beginning to threaten the existence of music stores.

A flash animation of badgers singing "badger, badger, badger" has become extremely popular on the Internet. The animation, which loops indefinitely, was published by British animator Jonti Picking in September, 2003. It's 2004, so the music charts are being dominated by the likes of Usher, Alicia Keys, Maroon 5, OutKast, Mario Winans, the Terror Squad and Ciara. On TV, people are watching popular shows such as "Everybody Loves Raymond", "The Shield", "Cold Case" and "The Apprentice".

Meanwhile, gamers are playing titles such as "The Simpsons Hit & Run", "Pro Evolution Soccer 3", "True Crime: Streets of LA" and "Need for Speed: Underground". Children and teenagers are currently watching television shows such as "Ed, Edd n Eddy", "Dora the Explorer", "Grounded for Life" and "Drake & Josh". Popular toys at the moment include the likes of the PlayStation 2, Bratz (dolls), Yu-Gi-Oh! Trading Card Game and Beyblades (spinning top toys).

If you are looking for some childhood nostalgia, then check out February 15th, 2010 instead.

Celebrities, historical figures and notable people who were born on the 15th of February.

George W. Bush Jnr. was the President of the United States on February 15th, 2004.

Tony Blair was the Prime Minister of the United Kingdom on February 15th, 2004.

Enter your date of birth below to find out how old you were on February 15th, 2004.

Here are some fun statistics about February 15th, 2004.