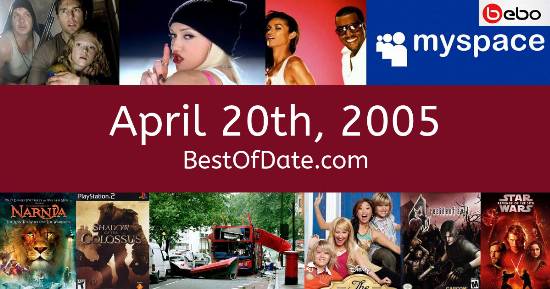 April 20th, 2005 relates to a fictional event in a movie, book, game or television series.

Songs that were on top of the music singles charts in the USA and the United Kingdom on April 20th, 2005.

The date is April 20th, 2005 and it's a Wednesday. Anyone born today will have the star sign Taurus. The summer of 2005 is drawing closer and temperatures have started to rise.

In America, the song Candy Shop by 50 Cent is on top of the singles charts. Over in the UK, (Is This The Way To) Amarillo by Tony Christie & Peter Kay is the number one hit song. George W. Bush Jnr. is currently the President of the United States and the movie The Amityville Horror (2005) is at the top of the Box Office.

On TV, people are watching popular shows such as "Stargate SG-1", "That '70s Show", "The West Wing" and "Battlestar Galactica". Meanwhile, gamers are playing titles such as "Counter-Strike: Source", "Killzone", "Half-Life 2" and "World of Warcraft". Children and teenagers are currently watching television shows such as "Malcolm in the Middle", "Jimmy Neutron", "That's So Raven" and "Laguna Beach: The Real Orange County".

If you're a kid or a teenager, then you're probably playing with toys such as Bratz (dolls), Yu-Gi-Oh! Trading Card Game, RoboSapien (toy robot) and the Nintendo DS.

If you are looking for some childhood nostalgia, then check out April 20th, 2011 instead.

Tony Blair was the Prime Minister of the United Kingdom on April 20th, 2005.

Enter your date of birth below to find out how old you were on April 20th, 2005.