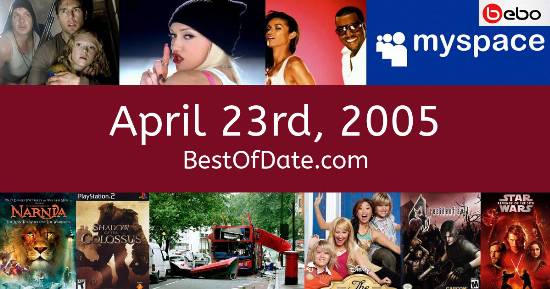 On April 23rd, 2005, the following songs were at the top of the music charts in the USA and the UK.

The top "Box Office" movie on this date was the film "The Interpreter".

The date is April 23rd, 2005, and it's a Saturday. Anyone born today will have the star sign Taurus. Currently, people are enjoying their weekend.

George W. Bush Jnr. is currently the President of the United States, and the movie The Interpreter is at the top of the Box Office. In the United Kingdom, Tony Blair is the current Prime Minister. In technology news, more and more people are beginning to gain access to the Internet. Internet speeds are increasing and MP3 sharing is beginning to threaten the existence of music stores.

The trial of pop star Michael Jackson for child molestation is attracting international media attention. If you were to travel back to this day, notable figures such as Luther Vandross, Rosa Parks, Eddie Guerrero and George Best would all be still alive. On TV, people are watching popular shows such as "Fear Factor", "Extreme Makeover: Home Edition", "Stargate Atlantis" and "Desperate Housewives".

Meanwhile, gamers are playing titles such as "Ratchet & Clank: Up Your Arsenal", "Killzone", "Halo 2" and "God of War". Children and teenagers are currently watching television shows such as "Ed, Edd n Eddy", "SpongeBob SquarePants", "As Told by Ginger" and "Peppa Pig". Popular toys at the moment include the likes of the Xbox, Yu-Gi-Oh! Trading Card Game, VideoNow (portable player) and RoboSapien (toy robot).

These are trending news stories and fads that were prevalent at this time. These are topics that would have been in the media on April 23rd, 2005.

News stories and other events that happened around April 23rd, 2005.

Check out our personality summary for people who were born on April 23rd, 2005.

Television shows that people were watching in April, 2005.

Popular video games that people were playing in April of 2005.

If you are looking for some childhood nostalgia, then you should check out April 23rd, 2011 instead.

American terrorist. Deceased
Born on April 23rd, 1968
He was not alive on this date.

Tony Blair was the Prime Minister of the United Kingdom on April 23rd, 2005.

Find out what your age was on April 23rd, 2005, by entering your DOB below.
This information is not saved on our server.