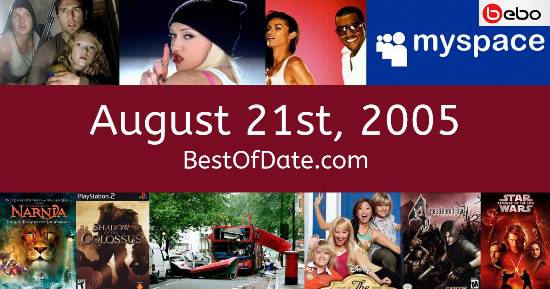 Songs that were on top of the music singles charts in the USA and the United Kingdom on August 21st, 2005.

The date is August 21st, 2005 and it's a Sunday. Anyone born today will have the star sign Leo. Currently, people are enjoying their weekend.

The summer of 2005 is coming to an end and fall is just around the corner. In America, the song We Belong Together by Mariah Carey is on top of the singles charts. Over in the UK, You're Beautiful by James Blunt is the number one hit song.

George W. Bush Jnr. is currently the President of the United States and the movie Four Brothers is at the top of the Box Office. In the United Kingdom, Tony Blair is the current Prime Minister. A popular software program called LimeWire is being used by many people to share MP3 files (and viruses).

Satirical factoids about actor Chuck Norris are extremely popular at the moment. These "Chuck Norris Facts" consist of absurd hyperbolic claims about Norris' toughness. On TV, people are watching popular shows such as "Futurama", "That's So Raven", "Teen Titans" and "The O.C.". Meanwhile, gamers are playing titles such as "Grand Theft Auto: San Andreas", "World of Warcraft", "Resident Evil 4" and "Battlefield 2".

Children and teenagers are currently watching television shows such as "That's So Raven", "My Life as a Teenage Robot", "Drake & Josh" and "LazyTown". If you're a kid or a teenager, then you're probably playing with toys such as the PlayStation 2, Bratz (dolls), Yu-Gi-Oh! Trading Card Game and the Nintendo DS.

A Spotify playlist of hit songs from 2005. Take a trip back to the peak days of Mario, Kanye West, 50 Cent and James Blunt.

Celebrities, historical figures and notable people who were born on the 21st of August.

George W. Bush Jnr. was the President of the United States on August 21st, 2005.

Tony Blair was the Prime Minister of the United Kingdom on August 21st, 2005.

Enter your date of birth below to find out how old you were on August 21st, 2005.

Leave a comment and tell everyone why August 21st, 2005 is important to you.