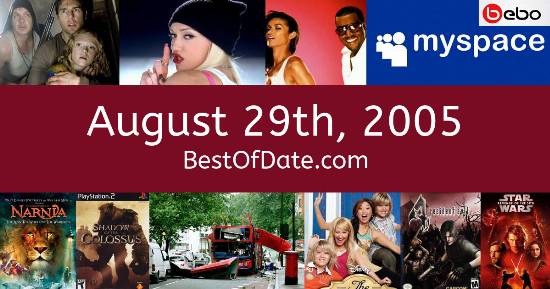 Songs that were on top of the music singles charts in the USA and the United Kingdom on August 29th, 2005.

The date is August 29th, 2005 and it's a Monday. Anyone born today will have the star sign Virgo. The summer of 2005 is coming to an end and fall is just around the corner.

In America, the song We Belong Together by Mariah Carey is on top of the singles charts. Over in the UK, I'll Be OK by McFly is the number one hit song. George W. Bush Jnr. is currently the President of the United States and the movie The 40-Year-Old Virgin is at the top of the Box Office.

On TV, people are watching popular shows such as "Last of the Summer Wine", "24", "Punk'd" and "Pimp My Ride". Meanwhile, gamers are playing titles such as "Grand Theft Auto: San Andreas", "Killzone", "Metal Gear Solid 3: Snake Eater" and "Lego Star Wars: The Video Game". Kids and teenagers are watching TV shows such as "Bear in the Big Blue House", "Teen Titans", "LazyTown" and "The Suite Life of Zack & Cody".

Popular toys at the moment include the likes of Yu-Gi-Oh! Trading Card Game, RoboSapien (toy robot), the Nintendo DS and the PSP.

George W. Bush Jnr. was the President of the United States on August 29th, 2005.

Tony Blair was the Prime Minister of the United Kingdom on August 29th, 2005.

Enter your date of birth below to find out how old you were on August 29th, 2005.

Leave a comment and tell everyone why August 29th, 2005 is important to you.