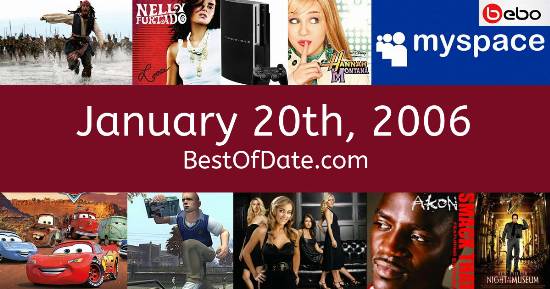 These songs were on top of the music charts in the United States and the United Kingdom on January 20th, 2006.

The top "Box Office" movie on this date was the film "Underworld: Evolution".

The date is January 20th, 2006, and it's a Friday. Anyone born today will have the star sign Aquarius. Currently, people have "that Friday feeling" and are looking forward to the weekend.

In America, the song Grillz by Nelly is on top of the singles charts. Over in the UK, That's My Goal by Shayne Ward is the number one hit song. George W. Bush Jnr. is currently the President of the United States, and the movie Underworld: Evolution is at the top of the Box Office.

In the United Kingdom, Tony Blair is the current Prime Minister. Internet users are using MSN Messenger to chat with each other online. Cameras on phones have become the norm. Furthermore, the quality of these cameras are continuing to increase with each new phone release. We are now entering into an age where any event can be photographed or recorded in an instance.

Practically every teenager and adult has a MySpace or a Bebo account. It's 2006, so the music charts are being dominated by the likes of Daniel Powter, Sean Paul, Nelly Furtado, James Blunt, Gnarls Barkley, Shakira and Natasha Bedingfield. If you were to travel back to this day, notable figures such as Chris Penn, J Dilla, Proof and Charles Haughey would all be still alive.

On TV, people are watching popular shows such as "Will & Grace", "Malcolm in the Middle", "One Tree Hill" and "Joey". Meanwhile, gamers are playing titles such as "RuneScape", "Fight Night Round 2", "Age of Empires III" and "Call of Duty 2". Children and teenagers are currently watching television shows such as "Bear in the Big Blue House", "That '70s Show", "The Cramp Twins" and "Everybody Hates Chris".

Popular toys at the moment include the likes of VideoNow (portable player), RoboSapien (toy robot), the PSP and the Xbox 360.

These are trending news stories and fads that were prevalent at this time. These are topics that would have been in the media on January 20th, 2006.

Check out our personality summary for people who were born on January 20th, 2006.

Television shows that people were watching in January, 2006.

Popular video games that people were playing in January of 2006.

If you are looking for some childhood nostalgia, then you should check out January 20th, 2012, instead.

George W. Bush Jnr. was the President of the United States on January 20th, 2006.

Enter your date of birth below to find out how old you were on January 20th, 2006.
This information is not transmitted to our server.

Here are some fun statistics about January 20th, 2006.