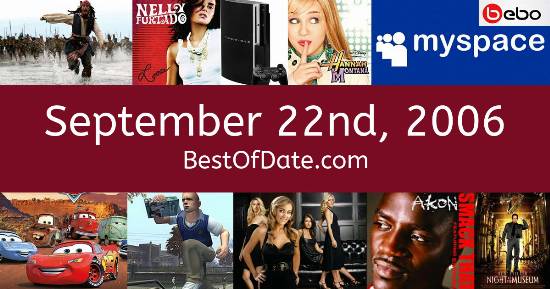 These songs were on top of the music charts in the United States and the United Kingdom on September 22nd, 2006.

The top "Box Office" movie on this date was the film "Jackass: Number Two".

The date is September 22nd, 2006, and it's a Friday. Anyone born today will have the star sign Virgo. Currently, people have "that Friday feeling" and are looking forward to the weekend.

Schools and colleges are starting again and Autumn has officially arrived. As a result, temperatures are beginning to cool and trees are starting to shed their leaves. The earthy smells of fall have started to fill the air. In America, the song Sexy Back by Justin Timberlake is on top of the singles charts.

Over in the UK, I Don't Feel Like Dancing by Scissor Sisters is the number one hit song. George W. Bush Jnr. is currently the President of the United States, and the movie Jackass: Number Two is at the top of the Box Office. In the United Kingdom, Tony Blair is the current Prime Minister.

A rock music genre called "Emo" is extremely popular at the moment. The genre, which stands for "emotional hardcore", has created a subculture of "Emos" who dye their hair black and wear thick frame glasses. If you were to travel back to this day, notable figures such as James Brown, Gerald Ford, Bam Bam Bigelow and Anna Nicole Smith would all be still alive. On TV, people are watching popular shows such as "The Sopranos", "Extreme Makeover: Home Edition", "Lost" and "The Office".

Meanwhile, gamers are playing titles such as "The Sims 2", "Shadow of the Colossus", "Grand Theft Auto: Liberty City Stories" and "Mario Kart DS". Children and teenagers are currently watching television shows such as "The Fairly OddParents", "Jimmy Neutron", "Ned's Declassified School Survival Guide" and "Go, Diego, Go!". If you're a kid or a teenager, then you're probably playing with toys such as Betty Spaghetty (doll), VideoNow (portable player), RoboSapien (toy robot) and the PSP.

These are trending news stories and fads that were prevalent at this time. These are topics that would have been in the media on September 22nd, 2006.

Check out our personality summary for people who were born on September 22nd, 2006.

Television shows that people were watching in September, 2006.

Popular video games that people were playing in September of 2006.

If you are looking for some childhood nostalgia, then you should check out September 22nd, 2012 instead.

George W. Bush Jnr. was the President of the United States on September 22nd, 2006.

Tony Blair was the Prime Minister of the United Kingdom on September 22nd, 2006.

Enter your date of birth below to find out how old you were on September 22nd, 2006.
This information is not transmitted to our server.

Here are some fun statistics about September 22nd, 2006.