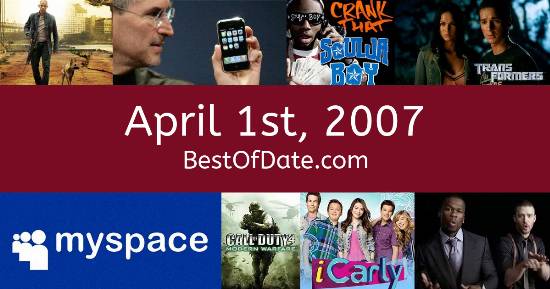 Songs that were on top of the music singles charts in the USA and the United Kingdom on April 1st, 2007.

The date is April 1st, 2007 and it's a Sunday. Anyone born today will have the star sign Aries. Currently, people are enjoying their weekend.

It is April Fool's Day, which means that people are playing practical jokes on one another. The summer of 2007 is drawing closer and temperatures have started to rise. In America, the song Glamorous by Ludacris & Fergie is on top of the singles charts.

Over in the UK, I'm Gonna Be (500 Miles) by Proclaimers is the number one hit song. George W. Bush Jnr. is currently the President of the United States and the movie TMNT is at the top of the Box Office. In the United Kingdom, Tony Blair is the current Prime Minister.

It's 2007, so the music charts are being dominated by the likes of Beyoncé, Rihanna, Jay-Z, Sean Kingston, Soulja Boy and Nelly Furtado. A financial crisis is looming. The stock market recently witnessed its worse fall since 2003 and house prices have started to decline. News organizations are reporting that the subprime mortgage market is "troubled". Former Federal Reserve Chairman Alan Greenspan has predicted that the United States will fall into a recession by the end of 2007. On TV, people are watching popular shows such as "7th Heaven", "One Tree Hill", "Cold Case" and "Lost".

Meanwhile, gamers are playing titles such as "Saints Row", "Bully", "Call of Duty 3" and "Resistance: Fall of Man". Children and teenagers are currently watching television shows such as "SpongeBob SquarePants", "Avatar: The Last Airbender", "Hannah Montana" and "Curious George". If you're a kid or a teenager, then you're probably playing with toys such as the Xbox 360, the PlayStation 3 and the Nintendo Wii.

If you are looking for some childhood nostalgia, then check out April 1st, 2013 instead.

Celebrities, historical figures and notable people who were born on the 1st of April.

George W. Bush Jnr. was the President of the United States on April 1st, 2007.

Tony Blair was the Prime Minister of the United Kingdom on April 1st, 2007.

Enter your date of birth below to find out how old you were on April 1st, 2007.

Here are some fun statistics about April 1st, 2007.