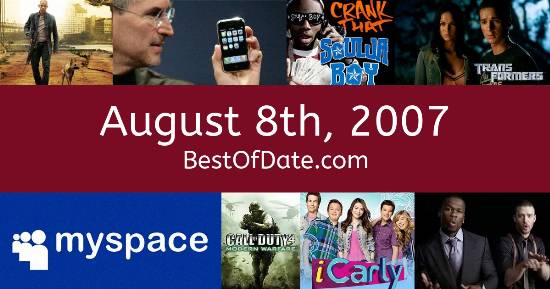 August 8th, 2007 relates to an event in a movie, book, game or television series:

Songs that were on top of the music singles charts in the USA and the United Kingdom on August 8th, 2007:

The date is August 8th, 2007 and it's a Wednesday. Anyone born today will have the star sign Leo. It's summer, so the temperatures are warmer and the evenings are longer than usual.

In America, the song Beautiful Girls by Sean Kingston is on top of the singles charts. Over in the UK, The Way I Are by Timbaland & Keri Hilson is the number one hit song. George W. Bush Jnr. is currently the President of the United States and the movie The Bourne Ultimatum is at the top of the Box Office.

It's 2007, so the music charts are being dominated by the likes of Beyoncé, Rihanna, Jay-Z, Sean Kingston, Soulja Boy and Nelly Furtado. Financial markets are currently rattled and issues with the U.S. subprime mortgage sector seem to be spiraling out of control. American Home Mortgage recently filed for bankruptcy and international banking group BNP Paribas has blocked withdrawals from three of its hedge funds due to a lack of liquidity. On TV, people are watching popular shows such as "Dora the Explorer", "Two and a Half Men", "Lost" and "Battlestar Galactica".

Meanwhile, gamers are playing titles such as "Dead Rising", "Just Cause", "Call of Duty 3" and "The Legend of Zelda: Twilight Princess". Children and teenagers are currently watching television shows such as "Zoey 101", "Mickey Mouse Clubhouse", "The Hills" and "Curious George". Popular toys include the likes of "Xbox 360", "PlayStation 3" and "Nintendo Wii".

Celebrities, historical figures and noteable people who were born on the 8th of August:

National holidays and famous events that fall on the 8th of August:

Who was the Prime Minister of the United Kingdom on August 8th, 2007?

Enter your date of birth below to find out how old you were on August 8th, 2007.

Looking for some nostalgia? Here are some Youtube videos relating to August 8th, 2007. Please note that videos are automatically selected by Youtube and that results may vary! Click on the "Load Next Video" button to view the next video in the search playlist. In many cases, you'll find episodes of old TV shows, documentaries, music videos and soap dramas.

Here are some fun statistics about August 8th, 2007.