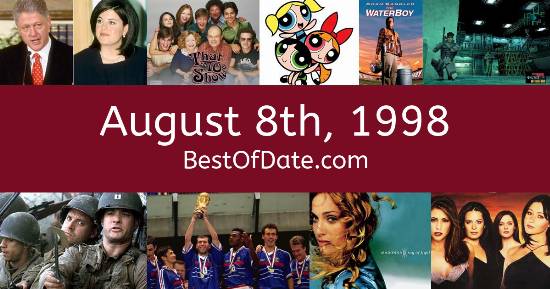 These songs were on top of the music charts in the United States and the United Kingdom on August 8th, 1998.

The date is August 8th, 1998, and it's a Saturday. Anyone born today will have the star sign Leo. Currently, people are enjoying their weekend.

It's summer, so the temperatures are warmer and the evenings are longer than usual. In America, the song The Boy Is Mine by Brandy & Monica is on top of the singles charts. Over in the UK, Viva Forever by Spice Girls is the number one hit song.

Bill Clinton is currently the President of the United States, and the movie Mask of Zorro is at the top of the Box Office. In the United Kingdom, Tony Blair is the current Prime Minister. A new form of communication called "text messaging" is continuing to grow in popularity. However, it can only be done if both the sender and the receiver are on the same cell network.

The Clinton-Lewinsky sex scandal is receiving ongoing media attention. A musical subgenre called "Nu metal" is beginning to take off, aided by the success of bands such as Korn. If you were to travel back to this day, notable figures such as Big L, Stanley Kubrick, Joe DiMaggio and Dana Plato would all be still alive.

On TV, people are watching popular shows such as "Baywatch", "Star Trek: Deep Space Nine", "Ally McBeal" and "Two Guys, a Girl and a Pizza Place". Meanwhile, gamers are playing titles such as "Final Fantasy VII", "Crash Bandicoot 2: Cortex Strikes Back", "World Cup 98" and "StarCraft". Kids and teenagers are watching TV shows such as "The Simpsons", "Beverly Hills, 90210", "Arthur" and "Men in Black: The Series".

Popular toys at the moment include the likes of Sylvanian Families, Fisher-Price Great Adventures Castle, the Tamagotchi and the Nintendo 64.

These are trending news stories and fads that were prevalent at this time. These are topics that would have been in the media on August 8th, 1998.

Check out our personality summary for people who were born on August 8th, 1998.

If you are looking for some childhood nostalgia, then you should check out August 8th, 2004 instead.

Bill Clinton was the President of the United States on August 8th, 1998.

Tony Blair was the Prime Minister of the United Kingdom on August 8th, 1998.

Enter your date of birth below to find out how old you were on August 8th, 1998.
This information is not transmitted to our server.

Here are some fun statistics about August 8th, 1998.