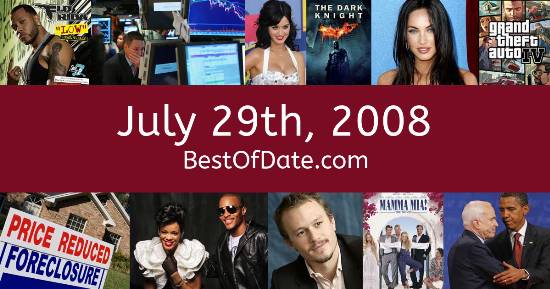 On July 29th, 2008, the following songs were at the top of the music charts in the USA and the UK.

The top "Box Office" movie on this date was the film "Hellboy II".

The date is July 29th, 2008, and it's a Tuesday. Anyone born today will have the star sign Leo. It's summer, so the temperatures are warmer and the evenings are longer than usual.

In America, the song I Kissed A Girl by Kate Perry is on top of the singles charts. Over in the UK, Dance Wiv Me by Dizzee Rascal is the number one hit song. George W. Bush Jnr. is currently the President of the United States, and the movie Hellboy II is at the top of the Box Office.

It's 2008, so the music charts are filled with artists such as Flo Rida, Katy Perry, Rihanna and T.I. If you were to travel back to this day, notable figures such as Bernie Mac, John Costelloe, Test and Natasha Richardson would all be still alive. On TV, people are watching popular shows such as "Two and a Half Men", "Cold Case", "House" and "Dexter".

Meanwhile, gamers are playing titles such as "Call of Duty 4: Modern Warfare", "Rock Band", "Super Smash Bros. Brawl" and "Mafia Wars". Kids and teenagers are watching TV shows such as "Peppa Pig", "Everybody Hates Chris", "Mickey Mouse Clubhouse" and "Horrid Henry". Popular toys at the moment include the likes of the Xbox 360, the PlayStation 3, Iggle Piggle and iPod Touch.

These are trending news stories and fads that were prevalent at this time. These are topics that would have been in the media on July 29th, 2008.

News stories and other events that happened around July 29th, 2008.

Check out our personality summary for people who were born on July 29th, 2008.

Television shows that people were watching in July, 2008.

Popular video games that people were playing in July of 2008.

If you are looking for some childhood nostalgia, then you should check out July 29th, 2014 instead.

Gordon Brown was the Prime Minister of the United Kingdom on July 29th, 2008.

Find out what your age was on July 29th, 2008, by entering your DOB below.
This information is not saved on our server.