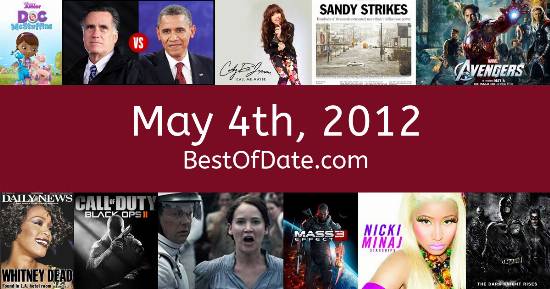 Songs that were on top of the music singles charts in the USA and the United Kingdom on May 4th, 2012.

The date is May 4th, 2012 and it's a Friday. Anyone born today will have the star sign Taurus. Currently, people have "that Friday feeling" and are looking forward to the weekend.

The summer of 2012 has finally arrived. The weather has warmed up and the evenings are brighter than usual. In America, the song Somebody That I Used To Know by Gitye ft Kimbra is on top of the singles charts. Over in the UK, Call Me Maybe by Carly Rae Jepsen is the number one hit song.

Barack Obama is currently the President of the United States and the movie Think Like a Man is at the top of the Box Office. In the United Kingdom, David Cameron is the current Prime Minister. Pre-made comics called "Rage Comics" are extremely popular on the Internet at the moment, as people use them to share relatable experiences.

Popular toys at the moment include the likes of the Xbox 360, the PlayStation 3 and the LeapPad Explorer.

Notable events that occurred around May 4th, 2012.

Historical weather information for May 4th, 2012.

Barack Obama was the President of the United States on May 4th, 2012.

David Cameron was the Prime Minister of the United Kingdom on May 4th, 2012.

Enter your date of birth below to find out how old you were on May 4th, 2012.

Leave a comment and tell everyone why May 4th, 2012 is important to you.