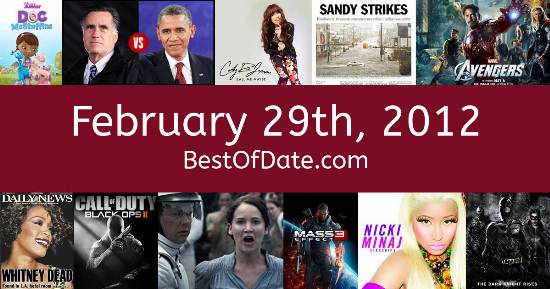 On February 29th, 2012, the following songs were at the top of the music charts in the USA and the UK.

The top "Box Office" movie on this date was the film "Act of Valor".

The date is February 29th, 2012, and it's a Wednesday. Anyone born today will have the star sign Pisces. In America, the song Part Of Me by Katy Perry is on top of the singles charts.

Over in the UK, Somebody That I Used To Know by Gitye ft Kimbra is the number one hit song. Barack Obama is currently the President of the United States, and the movie Act of Valor is at the top of the Box Office. In the United Kingdom, David Cameron is the current Prime Minister.

The slang phrase YOLO (You only live once) was beginning to rise in popularity at this time. It's 2012, so the music charts are being dominated by artists such as Carly Rae Jepsen, Gotye, Flo Rida, LMFAO and Ellie Goulding. An Internet meme called "Bad Luck Brian" is extremely popular at the moment.

A new documentary film called "Kony 2020" is receiving a lot of attention at the moment. The video, which aims to highlight the war crimes of Ugandan militia leader Joseph Kony, is being shared across social media websites such as Youtube, Facebook and Twitter. If you were to travel back to this day, notable figures such as Edd Gould, MCA, Rodney King and Sherman Hemsley would all be still alive. On TV, people are watching popular shows such as "CSI: Miami", "Bones", "Mad Men" and "The Vampire Diaries".

Meanwhile, gamers are playing titles such as "Total War: Shogun 2", "Crysis 2", "Gears of War 3" and "Call of Duty: Modern Warfare 3". Kids and teenagers are watching TV shows such as "The Fairly OddParents", "Phineas and Ferb", "Big Time Rush" and "Austin & Ally". Popular toys at the moment include the likes of the PlayStation 3, the KidiZoom Camera, the LeapPad Explorer and Skylanders Giants figures.

These are trending news stories and fads that were prevalent at this time. These are topics that would have been in the media on February 29th, 2012.

News stories and other events that happened around February 29th, 2012.

Check out our personality summary for people who were born on February 29th, 2012.

Television shows that people were watching in February, 2012.

Popular video games that people were playing in February of 2012.

If you are looking for some childhood nostalgia, then you should check out March 1st, 2018 instead.

Celebrities, historical figures and other notable people who were born on February 29th.

Barack Obama was the President of the United States on February 29th, 2012.

David Cameron was the Prime Minister of the United Kingdom on February 29th, 2012.

Find out what your age was on February 29th, 2012, by entering your DOB below.
This information is not saved on our server.

Here are some fun statistics about February 29th, 2012.