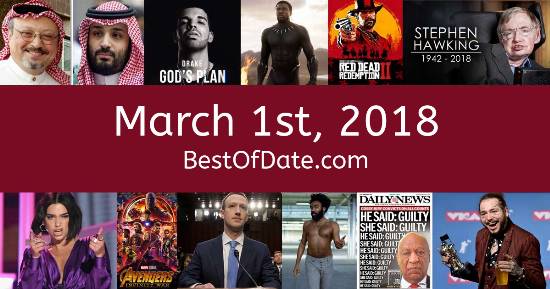 Songs that were on top of the music singles charts in the USA and the United Kingdom on March 1st, 2018.

The following comments about March 1st, 2018 were written by our visitors.

The date is March 1st, 2018, and it's a Thursday. Anyone born today will have the star sign Pisces. Spring has started to creep in and the days are beginning to get longer.

It's 2018, so the music charts are being dominated by artists such as Drake, Ed Sheeran, Camila Cabello, Post Malone, Cardi B, Juice Wrld and Dua Lipa. If you were to travel back to this day, notable figures such as Stephen Hawking, Barbara Bush, Avicii and Verne Troyer would all be still alive. On TV, people are watching popular shows such as "Homeland", "American Horror Story", "Once Upon a Time" and "Black Mirror".

Meanwhile, gamers are playing titles such as "What Remains of Edith Finch", "Destiny 2", "Assassin's Creed: Origins" and "Star Wars Battlefront II". Kids and teenagers are watching TV shows such as "Horrid Henry", "The Thundermans", "Henry Danger" and "Nicky, Ricky, Dicky & Dawn". Popular toys at the moment include the likes of the PlayStation 4, L.O.L. Surprise!, FurReal Roarin' Tyler and the Paw Patrol Lookout Tower Playset.

These are trending news stories and fads that were prevalent at this time. These are topics that would have been in the media on March 1st, 2018.

News stories and other events that happened around March 1st, 2018.

Check out our personality summary for people who were born on March 1st, 2018.

Television shows that people were watching in March, 2018.

Popular video games that people were playing in March of 2018.

Israeli Prime Minister. Deceased
Born on March 1st, 1922
He was not alive on this date.

Donald Trump was the President of the United States on March 1st, 2018.

Theresa May was the Prime Minister of the United Kingdom on March 1st, 2018.

Find out what your age was on March 1st, 2018, by entering your DOB below.
This information is not saved on our server.

Here are some fun statistics about March 1st, 2018.