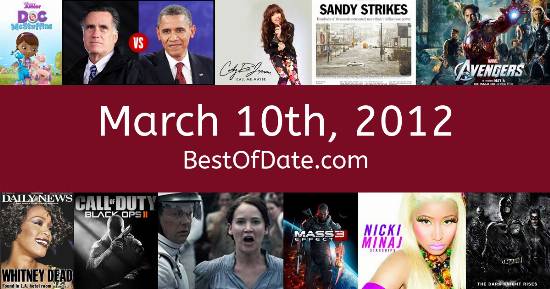 Songs that were on top of the music singles charts in the USA and the United Kingdom on March 10th, 2012.

The date is March 10th, 2012 and it's a Saturday. Anyone born today will have the star sign Pisces. Currently, people are enjoying their weekend.

Spring has started to creep in and the days are beginning to get longer. In America, the song Stronger (What Doesn't Kill You) by Kelly Clarkson is on top of the singles charts. Over in the UK, Somebody That I Used To Know by Gitye ft Kimbra is the number one hit song.

Barack Obama is currently the President of the United States and the movie The Lorax is at the top of the Box Office. In the United Kingdom, David Cameron is the current Prime Minister. Video rental stores such as Blockbuster are continuing to close their doors at the moment. This is due to the increasing popularity of online streaming services such as Netflix and Hulu.

Pre-made comics called "Rage Comics" are extremely popular on the Internet at the moment, as people use them to share relatable experiences. Meanwhile, in the Middle East, protests in Syria have snowballed and a civil war has started. Armed militias are currently springing up across the country. It's 2012, so the music charts are being dominated by artists such as Carly Rae Jepsen, Gotye, Flo Rida, LMFAO and Ellie Goulding.

A new documentary film called "Kony 2020" is receiving a lot of attention at the moment. The video, which aims to highlight the war crimes of Ugandan militia leader Joseph Kony, is being shared across social media websites such as Youtube, Facebook and Twitter. Meanwhile, a new photo-sharing app called Instagram is currently surging in popularity. In soccer, Chelsea have sacked manager Andre Villas-Boas after less than a year in charge.

Vladimir Putin has been elected as the President of Russia despite widespread accusations of vote-rigging. On TV, people are watching popular shows such as "One Tree Hill", "Desperate Housewives", "Community" and "Homeland". Meanwhile, gamers are playing titles such as "Homefront", "Portal 2", "Gears of War 3" and "Batman: Arkham City".

Kids and teenagers are watching TV shows such as "LazyTown", "Mickey Mouse Clubhouse", "Big Time Rush" and "Jake and the Never Land Pirates". Popular toys at the moment include the likes of the Xbox 360, the PlayStation 3, the KidiZoom Camera and the LeapPad Explorer.

If you are looking for some childhood nostalgia, then check out March 10th, 2018 instead.

Al-Qaeda Founder. Deceased
Born on March 10th, 1957
He was not alive on this date.

Barack Obama was the President of the United States on March 10th, 2012.

David Cameron was the Prime Minister of the United Kingdom on March 10th, 2012.

Enter your date of birth below to find out how old you were on March 10th, 2012.