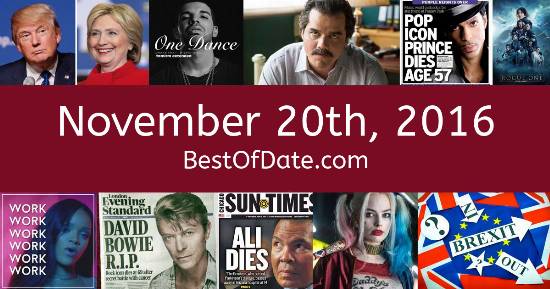 These songs were on top of the music charts in the United States and the United Kingdom on November 20th, 2016.

The top "Box Office" movie on this date was the film "Fantastic Beasts and Where To Find Them".

This was when I realized that Kanye was going off the rails. I think he had to be medicated after this episode.
Posted on November 20th, 2022 22:16

The date is November 20th, 2016, and it's a Sunday. Anyone born today will have the star sign Scorpio. Currently, people are enjoying their weekend.

In America, Thanksgiven Day of 2016 is just around the corner. It's November, so the evenings are getting darker and the days are getting colder. In America, the song Closer by The Chainsmokers is on top of the singles charts.

Over in the UK, Rockabye by Clean Bandit featuring Sean Paul is the number one hit song. Barack Obama is currently the President of the United States, and the movie Fantastic Beasts and Where To Find Them is at the top of the Box Office. In the United Kingdom, Theresa May is the current Prime Minister.

It's 2016, so the music charts are being dominated by artists such as Drake, Lukas Graham, Sia, Mike Posner, The Chainsmokers and Calvin Harris. A new line of robot toys called "Hatchimals" have recently been released. They are currently in high demand. A viral trend called the "Mannequin Challenge" has become popular online.

The world is in shock after billionaire and former reality TV star Donald Trump defeats Hillary Clinton to become the next president of the United States. In the aftermath of the US election, a series of "Petty Joe Biden" memes are starting to go viral. The memes portray Vice President Joe Biden as a childish prankster who is out to make life miserable for Donald Trump and Mike Pence. Rap star "Childish Gambino" has just released his hit single "Redbone".

Rap star Kanye West is in the news following a series of paranoid rants about Jay-Z and how he would have voted for Donald Trump in the 2016 election. According to reports, the rapper has been experiencing hallucinations and paranoia and is now receiving treatment at the UCLA Medical Center. If you were to travel back to this day, notable figures such as Fidel Castro, Big Syke, George Michael and Carrie Fisher would all be still alive. On TV, people are watching popular shows such as "The Vampire Diaries", "Modern Family", "Suits" and "Homeland".

Meanwhile, gamers are playing titles such as "Minecraft", "Halo 5: Guardians", "Rise of the Tomb Raider" and "Watch Dogs 2". Children and teenagers are currently watching television shows such as "Horrid Henry", "The Thundermans", "Nicky, Ricky, Dicky & Dawn" and "Bunnicula". Popular toys at the moment include the likes of the PlayStation 4, Barbie Saddle n Ride, Star Wars BB-8 toy droid and Hatchimals.

These are trending news stories and fads that were prevalent at this time. These are topics that would have been in the media on November 20th, 2016.

Check out our personality summary for people who were born on November 20th, 2016.

Television shows that people were watching in November, 2016.

Popular video games that people were playing in November of 2016.

Barack Obama was the President of the United States on November 20th, 2016.

Enter your date of birth below to find out how old you were on November 20th, 2016.
This information is not transmitted to our server.

Here are some fun statistics about November 20th, 2016.