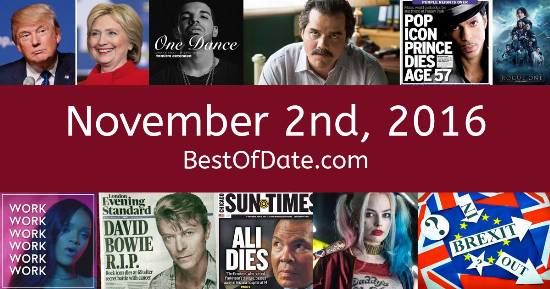 Songs that were on top of the music singles charts in the USA and the United Kingdom on November 2nd, 2016.

The movie "Boo! A Madea Halloween" was at the top of the box office on November 2nd, 2016.

The date is November 2nd, 2016 and it's a Wednesday. Anyone born today will have the star sign Scorpio. Halloween has just come and passed.

It's November, so the evenings are getting darker and the days are getting colder. In America, the song Closer by The Chainsmokers is on top of the singles charts. Over in the UK, Shout Out to My Ex by Little Mix is the number one hit song.

Barack Obama is currently the President of the United States and the movie Boo! A Madea Halloween is at the top of the Box Office. In the United Kingdom, Theresa May is the current Prime Minister. It's 2016, so the music charts are being dominated by artists such as Drake, Lukas Graham, Sia, Mike Posner, The Chainsmokers and Calvin Harris.

The 2016 United States presidential election is in full swing, with Hillary Clinton facing off against Donald Trump. FBI director James Comey has just announced that his agency will be investigating newly discovered emails that are pertinent to the FBI's previous investigation of Hillary Clinton's private server. As a result, Hillary Clinton's poll numbers begin to drop. A new line of robot toys called "Hatchimals" have recently been released. They are currently in high demand.

In baseball, the Chicago Cubs have just won the World Series for the first time in 108 years. On TV, people are watching popular shows such as "RuPaul's Drag Race", "The Vampire Diaries", "Homeland" and "Making a Murderer". Meanwhile, gamers are playing titles such as "PlayerUnknown's Battlegrounds", "Deus Ex: Mankind Divided", "Forza Horizon 3" and "Titanfall 2".

Children and teenagers are currently watching television shows such as "The Fairly OddParents", "Girl Meets World", "Game Shakers" and "Bunnicula". Popular toys at the moment include the likes of the Xbox One, Star Wars BB-8 toy droid, L.O.L. Surprise! and Hatchimals.

Celebrities, historical figures and notable people who were born on the 2nd of November.

Barack Obama was the President of the United States on November 2nd, 2016.

Theresa May was the Prime Minister of the United Kingdom on November 2nd, 2016.

Enter your date of birth below to find out how old you were on November 2nd, 2016.

Here are some fun statistics about November 2nd, 2016.

Have something to say about November 2nd, 2016?