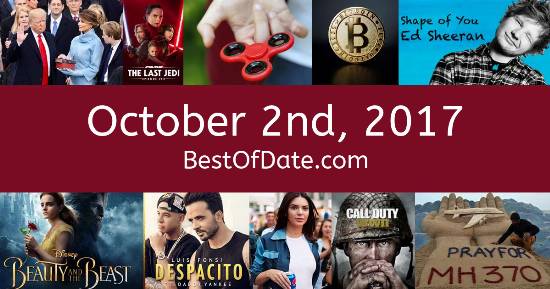 Songs that were on top of the music singles charts in the USA and the United Kingdom on October 2nd, 2017.

The movie "Kingsman: The Golden Circle" was at the top of the Box Office on October 2nd, 2017.

Tom Petty's passing was a shocker and the news about it was confusing for a few hours on whether he was still alive or had passed on.
Posted on June 13th, 2022 01:35

The date is October 2nd, 2017, and it's a Monday. Anyone born today will have the star sign Libra. The summer is long gone. Temperatures have started to become much cooler and the evenings are beginning to get darker.

Fallen leaves have carpeted driveways, lawns, pathways and sidewalks and there's a fresh earthy scent in the ear. In America, the song Look What You Made Me Do by Taylor Swift is on top of the singles charts. Over in the UK, Too Good at Goodbyes by Sam Smith is the number one hit song.

Donald Trump is currently the President of the United States, and the movie Kingsman: The Golden Circle is at the top of the Box Office. In the United Kingdom, Theresa May is the current Prime Minister. It's 2017, so the music charts are being dominated by artists such as Ed Sheeran, Luis Fonsi, Bruno Mars, Kendrick Lamar, The Chainsmokers, Migos, Sam Hunt and Post Malone.

An Internet meme called "Distracted Boyfriend" is currently going viral. The comedy song "Man's Not Hot" by Big Shaq has become an Internet sensation. Playboy magazine founder Hugh Hefner has just passed away at the age of 91.

58 people have been left dead in Las Vegas after a gun attack by a 64-year-old man called Stephen Paddock. Paddock opened fire on a crowd of people attending a music festival on the Las Vegas Strip. The event has reignited discussion about gun control in the United States. Former football player O.J. Simpson has just been released from prison after serving nine years for kidnapping and armed robbery. Tributes are pouring in following the accidental death of singer Tom Petty due to mixed drug toxicity.

If you were to travel back to this day, notable figures such as Tom Petty, Lil Peep, Malcolm Young and August Ames would all be still alive. On TV, people are watching popular shows such as "Black-ish", "Better Call Saul", "Stranger Things" and "13 Reasons Why". Meanwhile, gamers are playing titles such as "Cities: Skylines", "The Legend of Zelda: Breath of the Wild", "Destiny 2" and "Ark: Survival Evolved".

Kids and teenagers are watching TV shows such as "Henry Danger", "Nicky, Ricky, Dicky & Dawn", "Game Shakers" and "The Loud House". Popular toys at the moment include the likes of the PlayStation 4, L.O.L. Surprise!, the Nintendo Switch and FurReal Roarin' Tyler.

These are trending news stories and fads that were prevalent at this time. These are topics that would have been in the media on October 2nd, 2017.

Check out our personality summary for people who were born on October 2nd, 2017.

Television shows that people were watching in October, 2017.

Popular video games that people were playing in October of 2017.

American lawyer. Deceased
Born on October 2nd, 1937
He was not alive on this date.

Wrestler. Deceased
Born on October 2nd, 1966
He was not alive on this date.

Rapper. Deceased
Born on October 2nd, 1973
He was not alive on this date.

Donald Trump was the President of the United States on October 2nd, 2017.

Enter your date of birth below to find out how old you were on October 2nd, 2017.
This information is not transmitted to our server.

Here are some fun statistics about October 2nd, 2017.