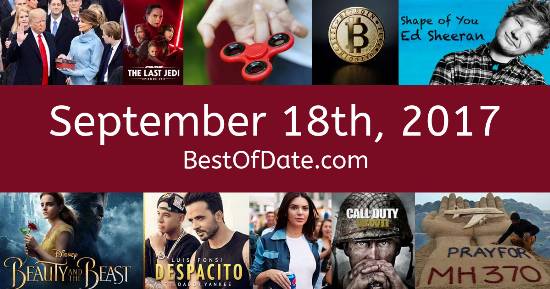 These songs were on top of the music charts in the United States and the United Kingdom on September 18th, 2017.

The movie "It" was at the top of the Box Office on this day.

The date is September 18th, 2017, and it's a Monday. Anyone born today will have the star sign Virgo. Schools and colleges are starting again and Autumn has officially arrived. As a result, temperatures are beginning to cool and trees are starting to shed their leaves.

The earthy smells of fall have started to fill the air. The song Look What You Made Me Do by Taylor Swift is on top of the singles charts in both the USA and the United Kingdom. Donald Trump is currently the President of the United States, and the movie It is at the top of the Box Office.

In the United Kingdom, Theresa May is the current Prime Minister. It's 2017, so the music charts are being dominated by artists such as Ed Sheeran, Luis Fonsi, Bruno Mars, Kendrick Lamar, The Chainsmokers, Migos, Sam Hunt and Post Malone. An Internet meme called "Distracted Boyfriend" is currently going viral.

International toy retailer Toys "R" Us has recently filed for bankruptcy protection. If you were to travel back to this day, notable figures such as Greg Antonacci, Hugh Hefner, Tom Petty and Lil Peep would all be still alive. On TV, people are watching popular shows such as "Grey's Anatomy", "American Horror Story", "Stranger Things" and "13 Reasons Why".

Meanwhile, gamers are playing titles such as "Cities: Skylines", "PlayerUnknown's Battlegrounds", "Resident Evil 7: Biohazard" and "What Remains of Edith Finch". Kids and teenagers are watching TV shows such as "Doc McStuffins", "The Thundermans", "Nicky, Ricky, Dicky & Dawn" and "Bunnicula". Popular toys at the moment include the likes of L.O.L. Surprise!, Hatchimals, Fidget spinners and the Nintendo Switch.

These are trending news stories and fads that were prevalent at this time. These are topics that would have been in the media on September 18th, 2017.

Check out our personality summary for people who were born on September 18th, 2017.

Television shows that people were watching in September, 2017.

Popular video games that people were playing in September of 2017.

Celebrities, historical figures, and other notable people who were born on September 18th.

Actor. Deceased
Born on September 18th, 1961
He was not alive on this date.

Donald Trump was the President of the United States on September 18th, 2017.

Enter your date of birth below to find out how old you were on September 18th, 2017.
This information is not transmitted to our server.

Here are some fun statistics about September 18th, 2017.