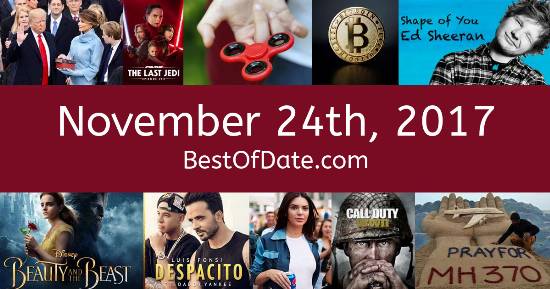 Songs that were on top of the music singles charts in the USA and the United Kingdom on November 24th, 2017.

The date is November 24th, 2017 and it's a Friday. Anyone born today will have the star sign Sagittarius. Currently, people have "that Friday feeling" and are looking forward to the weekend.

In America, the song Rockstar by Post Malone is on top of the singles charts. Over in the UK, Havana by Camila Cabello is the number one hit song. Donald Trump is currently the President of the United States and the movie Justice League is at the top of the Box Office.

In the United Kingdom, Theresa May is the current Prime Minister. It's 2017, so the music charts are being dominated by artists such as Ed Sheeran, Luis Fonsi, Bruno Mars, Kendrick Lamar, The Chainsmokers, Migos, Sam Hunt and Post Malone. The Me Too movement has recently kicked off on Twitter and people are publicizing their sexual abuse allegations against prominent men in the entertainment industry.

The Hip Hop world is mourning the death of rapper Lil Peep, who recently died from an overdose. Long-time Zimbabwe leader Robert Mugabe has just been replaced as leader of ZANU-PF. If you were to travel back to this day, notable figures such as August Ames, Jonghyun, Stephen Hawking and Barbara Bush would all be still alive.

On TV, people are watching popular shows such as "RuPaul's Drag Race", "Modern Family", "The Walking Dead" and "Once Upon a Time". Meanwhile, gamers are playing titles such as "Mafia III", "Resident Evil 7: Biohazard", "What Remains of Edith Finch" and "Star Wars Battlefront II". Kids and teenagers are watching TV shows such as "Dora the Explorer", "Horrid Henry", "Bunnicula" and "The Loud House".

If you're a kid or a teenager, then you're probably playing with toys such as the Xbox One, L.O.L. Surprise!, Hatchimals and FurReal Roarin' Tyler.

Donald Trump was the President of the United States on November 24th, 2017.

Theresa May was the Prime Minister of the United Kingdom on November 24th, 2017.

Enter your date of birth below to find out how old you were on November 24th, 2017.

Here are some fun statistics about November 24th, 2017.