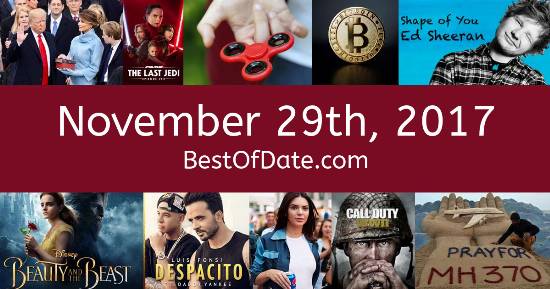 On November 29th, 2017, the following songs were at the top of the music charts in the USA and the UK.

The top "Box Office" movie on this date was the film "Coco".

The date is November 29th, 2017, and it's a Wednesday. Anyone born today will have the star sign Sagittarius. It's November, so the evenings are getting darker and the days are getting colder.

In America, the song Rockstar by Post Malone is on top of the singles charts. Over in the UK, Havana by Camila Cabello is the number one hit song. Donald Trump is currently the President of the United States, and the movie Coco is at the top of the Box Office.

In the United Kingdom, Theresa May is the current Prime Minister. It's 2017, so the music charts are being dominated by artists such as Ed Sheeran, Luis Fonsi, Bruno Mars, Kendrick Lamar, The Chainsmokers, Migos, Sam Hunt and Post Malone. The Me Too movement has recently kicked off on Twitter and people are publicizing their sexual abuse allegations against prominent men in the entertainment industry.

Prince Harry and actress Meghan Markle have just announced their engagement. The cryptocurrency Bitcoin has just reached $10,000 for the first time. If you were to travel back to this day, notable figures such as August Ames, Jonghyun, Stephen Hawking and Barbara Bush would all be still alive.

On TV, people are watching popular shows such as "Grey's Anatomy", "Suits", "Once Upon a Time" and "Orange Is the New Black". Meanwhile, gamers are playing titles such as "Mafia III", "Horizon Zero Dawn", "The Legend of Zelda: Breath of the Wild" and "Uncharted: The Lost Legacy". Children and teenagers are currently watching television shows such as "Horrid Henry", "Doc McStuffins", "The Thundermans" and "Game Shakers".

If you're a kid or a teenager, then you're probably playing with toys such as the PlayStation 4, the Xbox One, L.O.L. Surprise! and the Star Wars Droid Inventor Kit.

These are trending news stories and fads that were prevalent at this time. These are topics that would have been in the media on November 29th, 2017.

News stories and other events that happened around November 29th, 2017.

Check out our personality summary for people who were born on November 29th, 2017.

Television shows that people were watching in November, 2017.

Popular video games that people were playing in November of 2017.

Donald Trump was the President of the United States on November 29th, 2017.

Theresa May was the Prime Minister of the United Kingdom on November 29th, 2017.

Find out what your age was on November 29th, 2017, by entering your DOB below.
This information is not saved on our server.

Here are some fun statistics about November 29th, 2017.