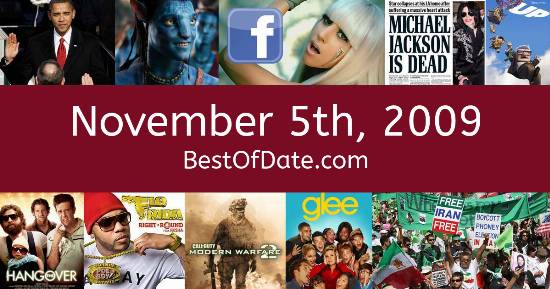 Songs that were on top of the music singles charts in the USA and the United Kingdom on November 5th, 2009.

The movie "Michael Jackson's This Is It" was at the top of the box office on November 5th, 2009.

The date is November 5th, 2009 and it's a Thursday. Anyone born today will have the star sign Scorpio. It's November, so the evenings are getting darker and the days are getting colder.

In America, the song Fireflies by Owl City is on top of the singles charts. Over in the UK, Everybody In Love by JLS is the number one hit song. Barack Obama is currently the President of the United States and the movie Michael Jackson's This Is It is at the top of the Box Office.

The term "hipster" is currently growing in use. The word is being used to describe people who are pretentious and deliberately anti-mainstream. Meanwhile, gaming fans are currently excited about the upcoming release of Call of Duty: Modern Warfare 2. If you were to travel back to this day, notable figures such as Umaga, Brittany Murphy, Corey Haim and Chris Kanyon would all be still alive.

On TV, people are watching popular shows such as "Two and a Half Men", "Cold Case", "Community" and "White Collar". Meanwhile, gamers are playing titles such as "Mafia Wars", "Resident Evil 5", "Minecraft" and "Farmville". Children and teenagers are currently watching television shows such as "Wizards of Waverly Place", "The Suite Life on Deck", "Sonny with a Chance" and "Glee".

If you are looking for some childhood nostalgia, then check out November 5th, 2015 instead.

Barack Obama was the President of the United States on November 5th, 2009.

Gordon Brown was the Prime Minister of the United Kingdom on November 5th, 2009.

Enter your date of birth below to find out how old you were on November 5th, 2009.

Here are some fun statistics about November 5th, 2009.

Have something to say about November 5th, 2009?