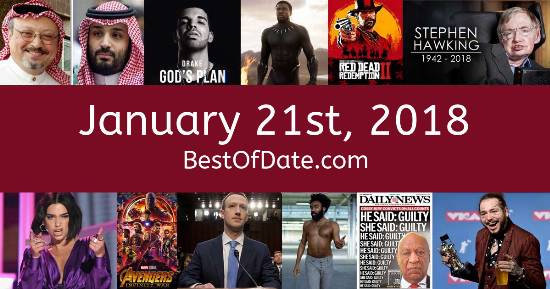 Songs that were on top of the music singles charts in the USA and the United Kingdom on January 21st, 2018.

The movie "Jumanji: Welcome to the Jungle" was at the top of the box office on January 21st, 2018.

The date is January 21st, 2018 and it's a Sunday. Anyone born today will have the star sign Aquarius. Currently, people are enjoying their weekend.

The song Perfect by Ed Sheeran is on top of the singles charts in both the USA and the United Kingdom. Donald Trump is currently the President of the United States and the movie Jumanji: Welcome to the Jungle is at the top of the Box Office. In the United Kingdom, Theresa May is the current Prime Minister.

It's 2018, so the music charts are being dominated by artists such as Drake, Ed Sheeran, Camila Cabello, Post Malone, Cardi B, Juice Wrld and Dua Lipa. On TV, people are watching popular shows such as "Modern Family", "Orange Is the New Black", "Peaky Blinders" and "Rick and Morty". Meanwhile, gamers are playing titles such as "What Remains of Edith Finch", "Crash Bandicoot N. Sane Trilogy", "Fortnite" and "PlayerUnknown's Battlegrounds (PUBG)".

Children and teenagers are currently watching television shows such as "Doc McStuffins", "Paw Patrol", "Henry Danger" and "Nicky, Ricky, Dicky & Dawn". Popular toys at the moment include the likes of the PlayStation 4, the Xbox One and the Nintendo Switch.

Celebrities, historical figures and notable people who were born on the 21st of January.

Donald Trump was the President of the United States on January 21st, 2018.

Theresa May was the Prime Minister of the United Kingdom on January 21st, 2018.

Enter your date of birth below to find out how old you were on January 21st, 2018.

Here are some fun statistics about January 21st, 2018.

Leave a comment and tell everyone why January 21st, 2018 is important to you.