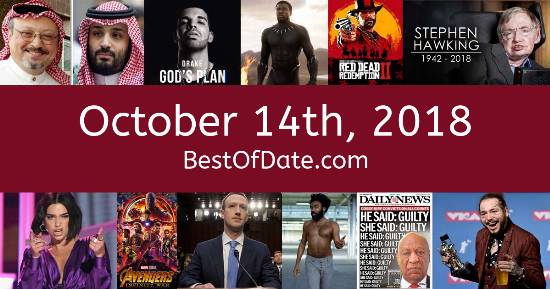 Songs that were on top of the music singles charts in the USA and the United Kingdom on October 14th, 2018.

The date is October 14th, 2018 and it's a Sunday. Anyone born today will have the star sign Libra. Currently, people are enjoying their weekend.

The summer is long gone. Temperatures have started to become much cooler and the evenings are beginning to get darker. Fallen leaves have carpeted driveways, lawns, pathways and sidewalks and there's a fresh earthy scent in the ear. In America, the song Girls Like You by Maroon 5 featuring Cardi B is on top of the singles charts.

Over in the UK, Promises by Calvin Harris and Sam Smith is the number one hit song. Donald Trump is currently the President of the United States and the movie Venom is at the top of the Box Office. In the United Kingdom, Theresa May is the current Prime Minister.

It's 2018, so the music charts are being dominated by artists such as Drake, Ed Sheeran, Camila Cabello, Post Malone, Cardi B, Juice Wrld and Dua Lipa. If you were to travel back to this day, notable figures such as Stan Lee, George H. W. Bush (Senior), Emiliano Sala and Keith Flint would all be still alive. On TV, people are watching popular shows such as "Grey's Anatomy", "American Horror Story", "Black Mirror" and "Rick and Morty".

Meanwhile, gamers are playing titles such as "Star Wars Battlefront II", "Monster Hunter: World", "Call of Duty: Black Ops 4" and "Spider-Man". Children and teenagers are currently watching television shows such as "Dora the Explorer", "Henry Danger", "Game Shakers" and "The Loud House". If you're a kid or a teenager, then you're probably playing with toys such as the Xbox One, L.O.L. Surprise!, FurReal Roarin' Tyler and the Paw Patrol Lookout Tower Playset.

English actor. Deceased
Born on October 14th, 1927
He was not alive on this date.

Donald Trump was the President of the United States on October 14th, 2018.

Theresa May was the Prime Minister of the United Kingdom on October 14th, 2018.

Enter your date of birth below to find out how old you were on October 14th, 2018.

Here are some fun statistics about October 14th, 2018.