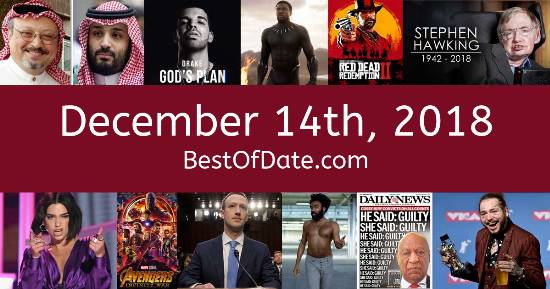 Songs that were on top of the music singles charts in the USA and the United Kingdom on December 14th, 2018.

The movie "Ralph Breaks the Internet" was at the top of the box office on December 14th, 2018.

The date is December 14th, 2018 and it's a Friday. Anyone born today will have the star sign Sagittarius. Currently, people have "that Friday feeling" and are looking forward to the weekend.

The Christmas season of 2018 is in full swing. People are putting up their decorations and festive songs are playing on the radio. In America, the song Sicko Mode by Travis Scott is on top of the singles charts. Over in the UK, Thank U, Next by Ariana Grande is the number one hit song.

Donald Trump is currently the President of the United States and the movie Ralph Breaks the Internet is at the top of the Box Office. In the United Kingdom, Theresa May is the current Prime Minister. It's 2018, so the music charts are being dominated by artists such as Drake, Ed Sheeran, Camila Cabello, Post Malone, Cardi B, Juice Wrld and Dua Lipa.

If you were to travel back to this day, notable figures such as Emiliano Sala, Keith Flint, Luke Perry and Mike Thalassitis would all be still alive. On TV, people are watching popular shows such as "RuPaul's Drag Race", "The Walking Dead", "Game of Thrones" and "Power". Meanwhile, gamers are playing titles such as "Fortnite", "Ark: Survival Evolved", "God of War" and "Super Smash Bros. Ultimate".

Children and teenagers are currently watching television shows such as "Doc McStuffins", "Agents of S.H.I.E.L.D.", "Henry Danger" and "The Loud House". If you're a kid or a teenager, then you're probably playing with toys such as the Xbox One, L.O.L. Surprise!, FurReal Roarin' Tyler and the Paw Patrol Lookout Tower Playset.

Actress. Deceased
Born on December 14th, 1973
She was not alive on this date.

Donald Trump was the President of the United States on December 14th, 2018.

Theresa May was the Prime Minister of the United Kingdom on December 14th, 2018.

Enter your date of birth below to find out how old you were on December 14th, 2018.

Here are some fun statistics about December 14th, 2018.