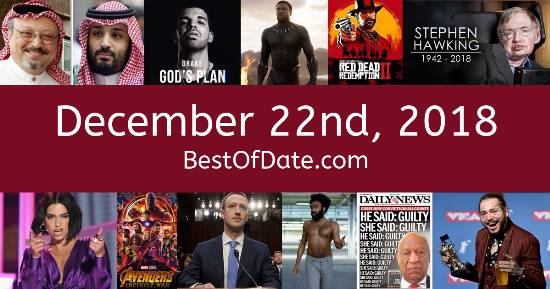 These songs were on top of the music charts in the United States and the United Kingdom on December 22nd, 2018.

The top "Box Office" movie on this date was the film "Spider-Man: Into the Spider-Verse".

The date is December 22nd, 2018, and it's a Saturday. Anyone born today will have the star sign Capricorn. Currently, people are enjoying their weekend.

Christmas Day of 2018 is fast approaching and the excitement is building. Department stores are thronged with Christmas shoppers. The song Thank U, Next by Ariana Grande is on top of the singles charts in both the USA and the United Kingdom. Donald Trump is currently the President of the United States, and the movie Spider-Man: Into the Spider-Verse is at the top of the Box Office.

In the United Kingdom, Theresa May is the current Prime Minister. It's 2018, so the music charts are being dominated by artists such as Drake, Ed Sheeran, Camila Cabello, Post Malone, Cardi B, Juice Wrld and Dua Lipa. If you were to travel back to this day, notable figures such as Emiliano Sala, Keith Flint, Luke Perry and Mike Thalassitis would all be still alive.

On TV, people are watching popular shows such as "Suits", "American Horror Story", "Rick and Morty" and "Narcos: Mexico". Meanwhile, gamers are playing titles such as "Far Cry 5", "God of War", "Call of Duty: Black Ops 4" and "Red Dead Redemption 2". Kids and teenagers are watching TV shows such as "Doc McStuffins", "Agents of S.H.I.E.L.D.", "Henry Danger" and "Bunnicula".

If you're a kid or a teenager, then you're probably playing with toys such as the PlayStation 4, the Xbox One, L.O.L. Surprise! and the Star Wars Droid Inventor Kit.

These are trending news stories and fads that were prevalent at this time. These are topics that would have been in the media on December 22nd, 2018.

Check out our personality summary for people who were born on December 22nd, 2018.

Television shows that people were watching in December, 2018.

Popular video games that people were playing in December of 2018.

Donald Trump was the President of the United States on December 22nd, 2018.

Theresa May was the Prime Minister of the United Kingdom on December 22nd, 2018.

Enter your date of birth below to find out how old you were on December 22nd, 2018.
This information is not transmitted to our server.

Here are some fun statistics about December 22nd, 2018.