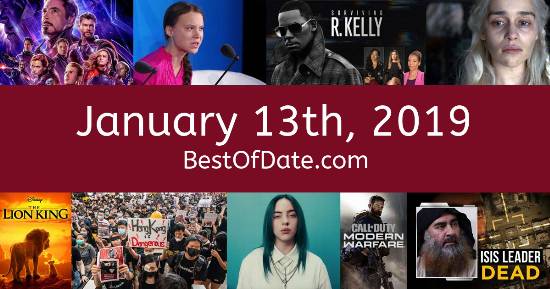 These songs were on top of the music charts in the United States and the United Kingdom on January 13th, 2019.

The movie "The Upside" was at the top of the Box Office on this day.

The date is January 13th, 2019, and it's a Sunday. Anyone born today will have the star sign Capricorn. Currently, people are enjoying their weekend.

The Christmas holiday season is long over, the decorations have been taken down and a sense of normality has returned. In America, the song Without Me by Halsey is on top of the singles charts. Over in the UK, Sweet but Psycho by Ava Max is the number one hit song.

Donald Trump is currently the President of the United States, and the movie The Upside is at the top of the Box Office. In the United Kingdom, Theresa May is the current Prime Minister. It's 2019, so the music charts are being dominated by artists such as Lil Nas X, Post Malone, Halsey, Billie Eilish and Ariana Grande.

If you were to travel back to this day, notable figures such as Emiliano Sala, Keith Flint, Luke Perry and Mike Thalassitis would all be still alive. On TV, people are watching popular shows such as "The Walking Dead", "Orange Is the New Black", "Peaky Blinders" and "Rick and Morty". Meanwhile, gamers are playing titles such as "God of War", "Call of Duty: Black Ops 4", "Red Dead Redemption 2" and "Super Smash Bros. Ultimate".

Kids and teenagers are watching TV shows such as "Horrid Henry", "Doc McStuffins", "Paw Patrol" and "Agents of S.H.I.E.L.D.". Popular toys at the moment include the likes of the PlayStation 4, the Xbox One, FurReal Roarin' Tyler and the Star Wars Droid Inventor Kit.

These are trending news stories and fads that were prevalent at this time. These are topics that would have been in the media on January 13th, 2019.

News stories and other events that happened around January 13th, 2019.

Check out our personality summary for people who were born on January 13th, 2019.

Television shows that people were watching in January, 2019.

Popular video games that people were playing in January of 2019.

TV personality. Deceased
Born on January 13th, 1972
He was not alive on this date.

Rapper. Deceased
Born on January 13th, 1997
He was not alive on this date.

Donald Trump was the President of the United States on January 13th, 2019.

Theresa May was the Prime Minister of the United Kingdom on January 13th, 2019.

Find out what your age was on January 13th, 2019, by entering your DOB below.
This information is not saved on our server.

Here are some fun statistics about January 13th, 2019.