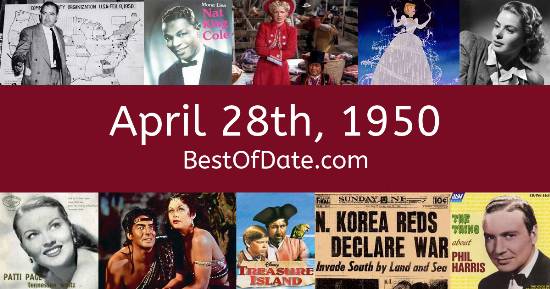 The date is April 28th, 1950 and it's a Friday. Anyone born today will have the star sign Taurus. Currently, people have "that Friday feeling" and are looking forward to the weekend.

The summer of 1950 is drawing closer and temperatures have started to rise. In music, the song "If I Knew You Were Comin' I'd've Baked a Cake" by Eileen Barton is the best-selling record at the moment. Harry S. Truman is currently the President of the United States and Clement Attlee is the Prime Minister of the United Kingdom.

Kids and teenagers are watching TV shows such as "Looney Tunes" and "Tom and Jerry". If you're a kid or a teenager, then you're probably playing with toys such as Dimestore soldiers, Foto-Electric Baseball, Spinning Tops and BAS-KET Miniature Basketball.

If you are looking for some childhood nostalgia, then check out April 28th, 1956 instead.

Spanish actress.
Born on April 28th, 1974
She was born exactly 24 years after this date.

American actress.
Born on April 28th, 1981
She was born exactly 31 years after this date.

English TV personality. Deceased
Born on April 28th, 1982
She was born exactly 32 years after this date.

Spanish soccer player.
Born on April 28th, 1988
He was born exactly 38 years after this date.

Internet celebrity.
Born on April 28th, 1992
She was born exactly 42 years after this date.

Harry S. Truman was the President of the United States on April 28th, 1950.

Clement Attlee was the Prime Minister of the United Kingdom on April 28th, 1950.

Enter your date of birth below to find out how old you were on April 28th, 1950.