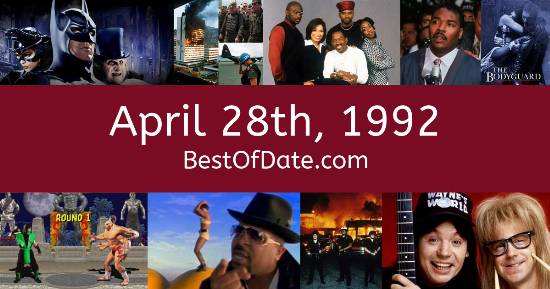 On April 28th, 1992, the following songs were at the top of the music charts in the USA and the UK.

The date is April 28th, 1992, and it's a Tuesday. Anyone born today will have the star sign Taurus. The summer of 1992 is drawing closer and temperatures have started to rise.

A war has broken out in Bosnia and Herzegovina following the shelling of Sarajevo by Serb forces. In the Mexican city of Guadalajara, 215 have been killed after fuel that had been leaked into a sewer causes multiple explosions. In celebrity news, singer David Bowie has married Somali fashion model Iman in Switzerland.

In soccer, Leeds United have just won the Football League First Division after beating Sheffield United 3–2. Their title win was confirmed after challengers Manchester United lost 2-0 to Liverpool. If you were to travel back to this day, notable figures such as Robert Reed, Anthony Perkins, Audrey Hepburn and Thurgood Marshall would all be still alive. On TV, people are watching popular shows such as "'Allo 'Allo!", "The Golden Girls", "Quantum Leap" and "Baywatch".

Meanwhile, gamers are playing titles such as "The Simpsons: Bart vs. the Space Mutants", "Streets of Rage", "Super Castlevania IV" and "Desert Strike ". Kids and teenagers are watching TV shows such as "Round the Twist", "Clarissa Explains It All", "Dinosaurs" and "Taz-Mania". Popular toys at the moment include the likes of Sylvanian Families, Micro Machines, Teenage Mutant Hero Turtles figures and the SEGA Game Gear.

These are trending news stories and fads that were prevalent at this time. These are topics that would have been in the media on April 28th, 1992.

Check out our personality summary for people who were born on April 28th, 1992.

If you are looking for some childhood nostalgia, then you should check out April 28th, 1998 instead.

John Major was the Prime Minister of the United Kingdom on April 28th, 1992.

Enter your date of birth below to find out how old you were on April 28th, 1992.
This information is not transmitted to our server.