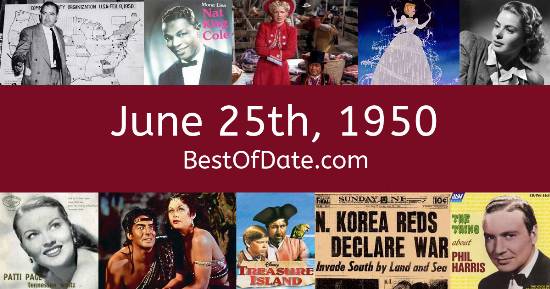 The best-selling single on June 25th, 1950 was "The Third Man Theme" by Anton Karas.

The date is June 25th, 1950 and it's a Sunday. Anyone born today will have the star sign Cancer. Currently, people are enjoying their weekend.

It's summer, so the temperatures are warmer and the evenings are longer than usual. In music, the song "The Third Man Theme" by Anton Karas is the best-selling record at the moment. Harry S. Truman is currently the President of the United States and Clement Attlee is the Prime Minister of the United Kingdom.

In Asia, the Korean War is raging on between South Korea and North Korea. On TV, people are watching popular shows such as "The Ed Sullivan Show", "The Lone Ranger", "What's My Line?" and "Space Patrol". Children and teenagers are currently watching television shows such as "Looney Tunes" and "Tom and Jerry".

If you are looking for some childhood nostalgia, then check out June 25th, 1956 instead.

Celebrities, historical figures and notable people who were born on the 25th of June.

Harry S. Truman was the President of the United States on June 25th, 1950.

Clement Attlee was the Prime Minister of the United Kingdom on June 25th, 1950.