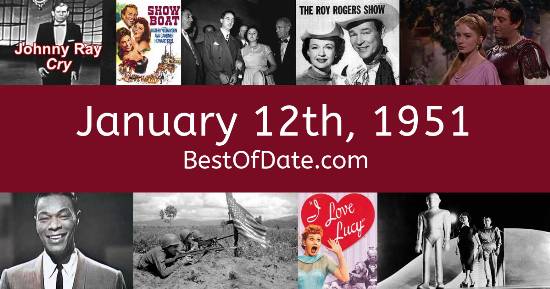 The best-selling single on January 12th, 1951 was "The Tennessee Waltz" by Patti Page.

The date is January 12th, 1951 and it's a Friday. Anyone born today will have the star sign Capricorn. Currently, people have "that Friday feeling" and are looking forward to the weekend.

The Christmas holiday season is long over, the decorations have been taken down and a sense of normality has returned. In music, the song "The Tennessee Waltz" by Patti Page is the best-selling record at the moment. Harry S. Truman is currently the President of the United States and Clement Attlee is the Prime Minister of the United Kingdom.

On TV, people are watching popular shows such as "The Lone Ranger", "Space Patrol", "The Colgate Comedy Hour" and "The George Burns and Gracie Allen Show". Children and teenagers are currently watching television shows such as "Looney Tunes", "Tom and Jerry" and "Crusader Rabbit". If you're a kid or a teenager, then you're probably playing with toys such as Dimestore soldiers, Tonka trucks, Foto-Electric Baseball and Toy Guns.

If you are looking for some childhood nostalgia, then check out January 12th, 1957 instead.

Radio personality.
Born on January 12th, 1954
He was born exactly 3 years after this date.

Amazon founder.
Born on January 12th, 1964
He was born exactly 13 years after this date.

Actress. Deceased
Born on January 12th, 1987
She was born exactly 36 years after this date.

Harry S. Truman was the President of the United States on January 12th, 1951.

Clement Attlee was the Prime Minister of the United Kingdom on January 12th, 1951.

Enter your date of birth below to find out how old you were on January 12th, 1951.

Here are some fun statistics about January 12th, 1951.