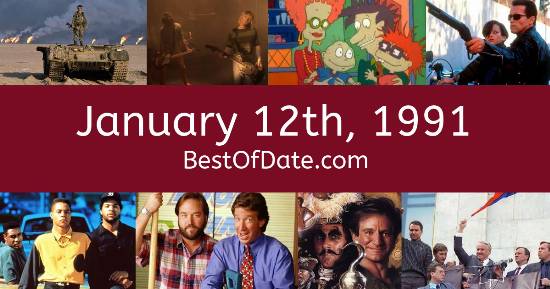 Songs that were on top of the music singles charts in the USA and the United Kingdom on January 12th, 1991.

The date is January 12th, 1991 and it's a Saturday. Anyone born today will have the star sign Capricorn. Currently, people are enjoying their weekend.

The Christmas holiday season is long over, the decorations have been taken down and a sense of normality has returned. In America, the song Justify My Love by Madonna is on top of the singles charts. Over in the UK, Bring Your Daughter To The Slaughter by Iron Maiden is the number one hit song.

George W. Bush Snr. is currently the President of the United States and the movie Home Alone is at the top of the Box Office. In the United Kingdom, John Major is the current Prime Minister. Texting is not a thing yet. Instead, people are using landline phones and pagers. Furthermore, the vast majority of people still have no idea what "the Internet" is.

In fashion, many of the trends from the late 80s are still popular. Colored tights, denim overalls, leotards, flannel shirts and shoulder pads are all fashionable at the moment. Iraqi forces are continuing to occupy Kuwait following an invasion at the start of August. The UN Security Council has given Iraq a deadline to withdraw from the country by the 15th of January. If Iraqi forces fail to withdraw on time, "all necessary means" will be used to push them out. A civil war is currently taking place in the African country of Rwanda.

It's 1991, so the airwaves are being dominated by artists such as Bryan Adams, Michael Jackson, Roxette, R.E.M., Color Me Badd and Paula Abdul. If you were to travel back to this day, notable figures such as John Bardeen, Miles Davis, Freddie Mercury and Robert Reed would all be still alive. On TV, people are watching popular shows such as "Dallas", "Sherlock Holmes", "Married... with Children" and "One Foot in the Grave".

Meanwhile, gamers are playing titles such as "Duck Hunt", "Paperboy", "Super Mario Land" and "Railroad Tycoon". Kids and teenagers are watching TV shows such as "Mister Rogers' Neighborhood", "The Real Ghostbusters", "Full House" and "The Fresh Prince of Bel-Air". Popular toys at the moment include the likes of Sylvanian Families, the Nintendo Entertainment System, Micro Machines and Teenage Mutant Hero Turtles figures.

If you are looking for some childhood nostalgia, then check out January 12th, 1997 instead.

George W. Bush Snr. was the President of the United States on January 12th, 1991.

John Major was the Prime Minister of the United Kingdom on January 12th, 1991.

Enter your date of birth below to find out how old you were on January 12th, 1991.

Here are some fun statistics about January 12th, 1991.