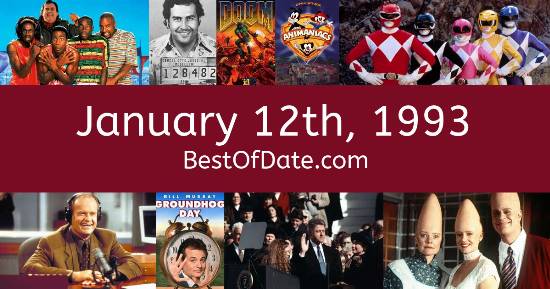 Songs that were on top of the music singles charts in the USA and the United Kingdom on January 12th, 1993.

The date is January 12th, 1993 and it's a Tuesday. Anyone born today will have the star sign Capricorn. The Christmas holiday season is long over, the decorations have been taken down and a sense of normality has returned.

It's 1993, so radio stations are being dominated by the likes of Meat Loaf, UB40, Snow, Haddaway, Whitney Houston, Take That, Janet Jackson and Mariah Carey. A new sci-fi series called "Star Trek: Deep Space Nine" has just been aired on television. In Rochester, New York, over $7 million dollars has been stolen from a Brink's Armored Car Depot.

In music news, the soundtrack for "The Bodyguard" has broken a new record by selling 1 million copies in one week in the USA. In wrestling, the WWF has launched a new TV program called "Monday Night Raw". The new show will replace "Prime Time Wrestling", which had been running for eight years. In Ireland, Albert Reynolds has recently been elected Taoiseach. His party Fianna Fáil have now formed a coalition with the Labour Party following the results of the general election in November of last year.

If you were to travel back to this day, notable figures such as Audrey Hepburn, Thurgood Marshall, Andre the Giant and Bobby Moore would all be still alive. On TV, people are watching popular shows such as "Quantum Leap", "Family Matters", "Step by Step" and "Star Trek: Deep Space Nine". Meanwhile, gamers are playing titles such as "Paperboy", "Wolfenstein 3D", "Evander Holyfield's Real Deal Boxing" and "Super Star Wars".

Children and teenagers are currently watching television shows such as "Thomas the Tank Engine", "Adventures of the Little Koala", "The Wonder Years" and "Goof Troop". If you're a kid or a teenager, then you're probably playing with toys such as Cabbage Patch Kids, the Super Nintendo Entertainment System (SNES), Pogs / Milkcaps and Nerf Blaster.

If you are looking for some childhood nostalgia, then check out January 12th, 1999 instead.

George W. Bush Snr. was the President of the United States on January 12th, 1993.

John Major was the Prime Minister of the United Kingdom on January 12th, 1993.

Enter your date of birth below to find out how old you were on January 12th, 1993.

Here are some fun statistics about January 12th, 1993.