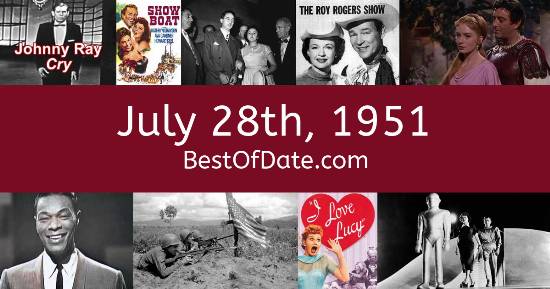 The best-selling single on July 28th, 1951 was "Come on a My House" by Rosemary Clooney.

The date is July 28th, 1951 and it's a Saturday. Anyone born today will have the star sign Leo. Currently, people are enjoying their weekend.

It's summer, so the temperatures are warmer and the evenings are longer than usual. In music, the song "Come on a My House" by Rosemary Clooney is the best-selling record at the moment. Harry S. Truman is currently the President of the United States and Clement Attlee is the Prime Minister of the United Kingdom.

On TV, people are watching popular shows such as "What's My Line?", "The Cisco Kid", "You Bet Your Life" and "Racket Squad". Children and teenagers are currently watching television shows such as "Looney Tunes", "Tom and Jerry", "Jim and Judy in Teleland" and "Crusader Rabbit". Popular toys at the moment include the likes of Tonka trucks, Foto-Electric Baseball, Spinning Tops and BAS-KET Miniature Basketball.

If you are looking for some childhood nostalgia, then check out July 28th, 1957 instead.

Venezuelan President. Deceased
Born on July 28th, 1954
He was born exactly 3 years after this date.

Harry S. Truman was the President of the United States on July 28th, 1951.

Clement Attlee was the Prime Minister of the United Kingdom on July 28th, 1951.