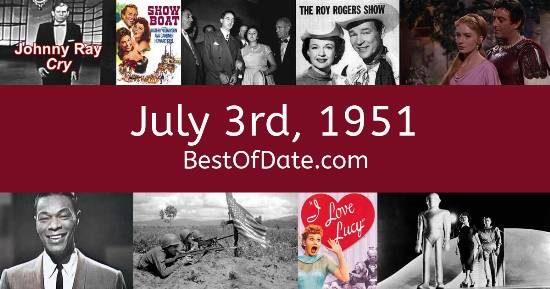 The date is July 3rd, 1951 and it's a Tuesday. Anyone born today will have the star sign Cancer. In America, the July 4th celebrations are fast approaching.

On TV, people are watching popular shows such as "The Lone Ranger", "What's My Line?", "You Bet Your Life" and "The Jack Benny Program". Children and teenagers are currently watching television shows such as "Looney Tunes", "Tom and Jerry", "Jim and Judy in Teleland" and "Crusader Rabbit". If you're a kid or a teenager, then you're probably playing with toys such as Dimestore soldiers, Tonka trucks, Toy Guns and BAS-KET Miniature Basketball.

If you are looking for some childhood nostalgia, then check out July 3rd, 1957 instead.

Television personality.
Born on July 3rd, 1956
He was born exactly 5 years after this date.

Wikileaks founder.
Born on July 3rd, 1971
He was born exactly 20 years after this date.

Harry S. Truman was the President of the United States on July 3rd, 1951.

Clement Attlee was the Prime Minister of the United Kingdom on July 3rd, 1951.

Enter your date of birth below to find out how old you were on July 3rd, 1951.

Here are some fun statistics about July 3rd, 1951.