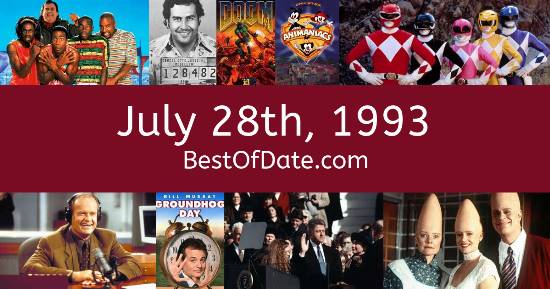 On July 28th, 1993, the following songs were at the top of the music charts in the USA and the UK.

The top "Box Office" movie on this date was the film "Poetic Justice".

The date is July 28th, 1993, and it's a Wednesday. Anyone born today will have the star sign Leo. It's summer, so the temperatures are warmer and the evenings are longer than usual.

In America, the song Can't Help Falling In Love by UB40 is on top of the singles charts. Over in the UK, Pray by Take That is the number one hit song. Bill Clinton is currently the President of the United States, and the movie Poetic Justice is at the top of the Box Office.

A playing discs game called "Pogs" is currently spreading in popularity throughout the world. It's 1993, so radio stations are being dominated by the likes of Meat Loaf, UB40, Snow, Haddaway, Whitney Houston, Take That, Janet Jackson and Mariah Carey. In Cape Town, South Africa, eleven people have been killed in a terrorist attack by the APLA. The attack happened when four members of the APLA opened fire on a congregation inside St James Church in Kenilworth.

In technology news, Microsoft has just released its new operating system "Windows NT 3.1". The comedy films "Coneheads" and "Robin Hood: Men in Tights" have both been released in movie theaters. If you were to travel back to this day, notable figures such as Vincent Price, River Phoenix, Frank Zappa and Bill Hicks would all be still alive.

On TV, people are watching popular shows such as "Matlock", "In the Heat of the Night", "Dr. Quinn, Medicine Woman" and "Star Trek: Deep Space Nine". Meanwhile, gamers are playing titles such as "Desert Strike ", "Evander Holyfield's Real Deal Boxing", "Super Mario Kart" and "Super Mario Land 2: 6 Golden Coins". Children and teenagers are currently watching television shows such as "Thomas the Tank Engine", "The Fresh Prince of Bel-Air", "Batman: The Animated Series" and "The Addams Family".

Popular toys at the moment include the likes of Sylvanian Families, the Game Boy, G.I. Joe (figures) and Teen Talk Barbie.

These are trending news stories and fads that were prevalent at this time. These are topics that would have been in the media on July 28th, 1993.

Check out our personality summary for people who were born on July 28th, 1993.

Television shows that people were watching in July, 1993.

Popular video games that people were playing in July of 1993.

If you are looking for some childhood nostalgia, then you should check out July 28th, 1999 instead.

Bill Clinton was the President of the United States on July 28th, 1993.

John Major was the Prime Minister of the United Kingdom on July 28th, 1993.

Enter your date of birth below to find out how old you were on July 28th, 1993.
This information is not transmitted to our server.