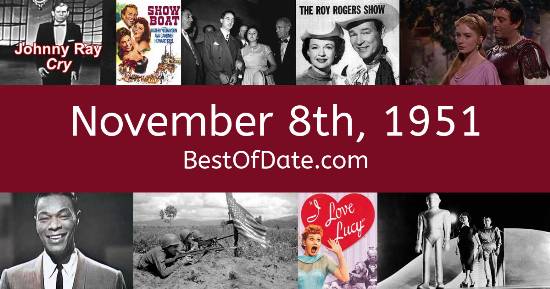 The best-selling single on November 8th, 1951 was "Cold, Cold Heart" by Tony Bennett.

The date is November 8th, 1951 and it's a Thursday. Anyone born today will have the star sign Scorpio. It's November, so the evenings are getting darker and the days are getting colder.

In music, the song "Cold, Cold Heart" by Tony Bennett is the best-selling record at the moment. Harry S. Truman is currently the President of the United States and Winston Churchill is the Prime Minister of the United Kingdom. In fashion, women are sporting the popular "The New Look" by Christian Dior. This formal style includes rounded shoulders, a full-skirted silhouette and a tight waist. Meanwhile, men are beginning to follow a new "Teddy Boy" trend that involves greased-back hair, extremely narrow trousers and velvet-collared jackets.

In Asia, the Korean War is raging on between South Korea and North Korea. It's 1951, so radio stations and jukeboxes are playing songs from artists such as Nat King Cole, Tony Bennett, Les Paul, Rosemary Clooney, Mary Ford, Mario Lanza, The Weavers, Perry Como and Patti Page. On TV, people are watching popular shows such as "The Gene Autry Show", "Beulah", "The Jack Benny Program" and "I Love Lucy".

Children and teenagers are currently watching television shows such as "Looney Tunes", "Tom and Jerry", "Jim and Judy in Teleland" and "Crusader Rabbit". If you're a kid or a teenager, then you're probably playing with toys such as Tonka trucks, Toy Guns, Spinning Tops and Colorforms.

If you are looking for some childhood nostalgia, then check out November 8th, 1957 instead.

Actor. Deceased
Born on November 8th, 1961
He was born exactly 10 years after this date.

Celebrity chef.
Born on November 8th, 1966
He was born exactly 15 years after this date.

Actress.
Born on November 8th, 1975
She was born exactly 24 years after this date.

Actress.
Born on November 8th, 1979
She was born exactly 28 years after this date.

Programmer and Internet hacktivist. Deceased
Born on November 8th, 1986
He was born exactly 35 years after this date.

Harry S. Truman was the President of the United States on November 8th, 1951.

Winston Churchill was the Prime Minister of the United Kingdom on November 8th, 1951.

Have something to say about November 8th, 1951?

Enter your date of birth below to find out how old you were on November 8th, 1951.

Here are some fun statistics about November 8th, 1951.